The Minister for Communications has said Cabinet ministers did not know about the emergence of information on recording phone calls in garda stations ahead of the contact between the Secretary General at the Department of Justice and the former garda commissioner on Monday.

It follows reports that the secretary general told former commissioner Martin Callinan, when he called to his home on Monday night, that there was disquiet at Cabinet level about the information given to the Taoiseach over the weekend by the Attorney General.

Speaking on RTÉ's News At One, Pat Rabbitte rejected suggestions that there were differences of opinion around the Cabinet table before that contact.

He said only Taoiseach Enda Kenny and Minister for Justice Alan Shatter were aware at that stage about the information regarding the recordings.

He said the first he and the remaining Cabinet ministers knew about it was at the Cabinet meeting on Tuesday morning.

The minister said Tánaiste Eamon Gilmore first heard about it at a pre-Cabinet meeting that morning.

Asked about why it had taken so long for information about the recordings to get to the right people, Mr Rabbitte said information regarding a particular litigation file on the civil side had been the subject of discussions between people in the Attorney General's Office, people in the Department of Justice and An Garda Síochána.

However, he said there was no knowledge and clarity at that stage that the capturing of telephone exchanges was going on wider than in that particular case.

Mr Rabbitte said he would have expected that management in the force at a much lower level than the garda commissioner, including chief superintendents in the regions, must have known about the practice.

He said the Commission of Inquiry would establish if successive garda commissioners had known about the practice of recording phone calls.

A spokesman for former minister for justice Máire Geoghegan-Quinn has said she "was not aware" of widespread recordings of phone calls by members of the public to garda stations when she was minister in the 1990s.

"If the question is, was she aware of random, large-scale tapings of conversations, then no, she was not aware," spokesman Michael Jennings said.

He said the extract from a Dail reply quoting Mrs Geoghegan-Quinn from 3 February 1994, posted on a social media site by Sinn Féin TD Pearse Doherty, referred to a specific case in which there was operational justification for the recording of a phone call.

Minister for Social Protection Joan Burton said she had no previous knowledge of the arrangements surrounding Mr Callinan's resignation and believed she was not alone in hearing about the matter for the first time during Tuesday's Cabinet meeting.

She also said she had confidence in Minister Shatter and felt he had answered all the questions asked of him in his statement to the Dáil yesterday.

Minister Burton said she was "very satisfied" with how Mr Shatter had withdrawn his comments about whistleblowers and apologised in the Dáil.

Last night in the Dáil Alan Shatter said he was with the Taoiseach on Monday night when the Secretary General of the Department of Justice was asked to visit former Garda Commissioner Martin Callinan that evening.

He said: "I was present with the Taoiseach and the Attorney General at the meeting that took place in the Taoiseach's department on Monday evening.

"And at a later point we were joined by the Secretary General of my department and the concerns around this issue were discussed in great detail and matters relating to it and the Secretary General from my Department, he wasn't dispatched, I think was the phrase used, he was asked to discuss matters with the Garda Commissioner and he did so that evening and I can't add to that any further.

"He was asked to discuss the issue that had arisen in relation to the tapes that has been found, the nature of the recordings and the serious implications of what had become known for An Garda Síochána".

The Taoiseach has said he is concerned that the garda phone recordings may have implications for both court cases and tribunals.

Speaking in Leixlip in Co Kildare at the confirmation of a €5bn upgrade of the Intel campus, Mr Kenny said it is a very serious matter and that is why the Commission of Inquiry has been set up.

He said he does not know the scale of the contents of the recordings yet, but said defence lawyers will have a massive interest in these revelations.

The Taoiseach also said Mr Callinan made his own decision to resign.

Mr Kenny said he asked a senior civil servant to make the former commissioner aware of his feelings about the gravity of the issue.

Yesterday, Fianna Fáil leader Micheál Martin said the Taoiseach had effectively "sacked" Mr Callinan, after it emerged he sent a senior civil servant to see him the day before he announced his retirement.

Also speaking in Leixlip today, Mr Gilmore said the taping of conversations is a very serious matter and there could be a possible impact on court cases.

Mr Gilmore said the full facts need to be established and that is why the inquiry has been set up.

He said work is being carried out at the moment on the terms of reference for that investigation.

The Government announced that it is to set up the statutory Commission of Inquiry, after learning that a system was in place in a large number of garda stations, whereby incoming and outgoing telephone calls were taped and recorded.

It emerged today that Mr Callinan delayed withdrawing his use of the word "disgusting" to describe the behaviour of the two garda whistleblowers following advice from Department of Justice officials.

Separately, High Court President Mr Justice Nicholas Kearns has communicated with judges dealing with criminal matters and has given them some guidance and advice in relation to the current situation.

It is understood that at an early stage in the trial process in the Central Criminal Court and Special Criminal Courts, the parties will be asked if they have any issues of concern relating to the allegations of the taping of phone calls in garda stations.

It would be a matter primarily for the Director of Public Prosecutions to identify if there are any issues arising.

The defence could make an application to have proceedings adjourned or any other application at that stage.

Independent TD, Shane Ross has this evening written to the chairman of the Public Accounts Committee to request that the tendering process in 2007 for the supply, delivery and maintenance of digital recording systems for An Garda Síochána should be examined by the committee.

In his letter, Deputy Ross said the committee should examine whether the service procured offered value for money and if the Department of Justice was spending part of its budget on a service that may have been operating illegally.

He has also suggested to the committee chairman that they should call the top officials in the Department of Justice and senior gardaí as witnesses.

Earlier, Mr Ross said the PAC had a duty where there was a Government contract to find out the circumstances in which it was granted and whether or not the public was getting value for money.

Speaking on RTÉ's Morning Ireland, Mr Ross also said TDs had a public duty to find out what had happened in relation to the recording of phone calls at garda stations.

It did not appear that the Government had a great appetite for inquiring into the circumstances in which this happened, and someone would have to do it, he added.

Mr Ross said the consequences of the revelations surrounding the recording of calls were "absolutely staggering".

He said the Commission of Inquiry's terms of reference had not been set yet, and we did not know what they would inquire into.

However, he added that TDs could not wait for the inquiry as he said that could take years.

The Data Protection Commissioner has said the issues surrounding the recording of calls to garda stations goes "way beyond data protection" and relates to having a fair court hearing.

Speaking on RTÉ's News At One, Billy Hawkes said he did not tell former Mr Callinan to delete what was on the tapes.

He said the "orthodox data protection advice" would be to delete data when there is no longer a reason to retain it.

However, he said data from public bodies cannot be deleted without the approval of the Director of the National Archives.

Mr Hawkes said he had received a letter from the former garda commissioner on 19 March seeking urgent advice about what to do with the recordings from garda stations.

He said he informed Mr Callinan that An Garda Síochána would need to develop a proper policy on the retention of personal data, which would apply to these tapes, and agree it with the Director of the National Archives.

To date the National Archives has not been approached or asked what should be done with recordings of telephone calls at garda stations. 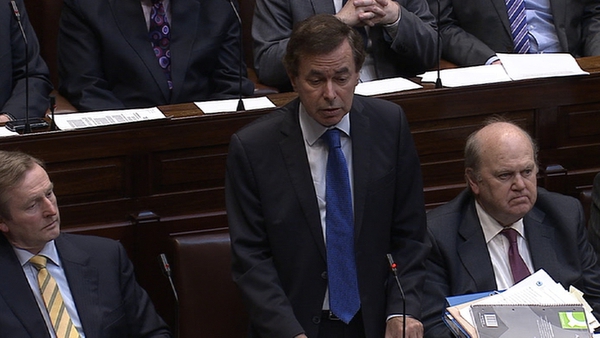