The Minister for Education is the latest member of the Cabinet to call on the Garda Commissioner to bring an end to the controversy surrounding the garda whistleblowers following the report of the Garda Inspectorate.

Ruairi Quinn said that while people in public office can, on occasion, find themselves in a position where their choice of words has been “unfortunate”, he believes it would be helpful if Commissioner Martin Callinan “could move to end the controversy”.

He said it is important that the debate now move on to the substantive issues of how to ensure that there are adequate processes in place to deal with allegations of wrong-doing within the gardaí.

It comes after Taoiseach Enda Kenny said he would prefer that any minister who wanted to raise any issue about the Garda Commissioner controversy would raise it at Cabinet level and "not air it in public".

Mr Kenny was speaking to reporters at the end of the second day of an EU summit in Brussels.

Mr Kenny added that this did not mean that Cabinet ministers should be "restricted" in what they say.

He said he acknowledged that it was as a result of whistleblower action that important issues had been brought into the public domain, and that changes had followed from that.

A spokeswoman for Tánaiste Eamon Gilmore said he shares the view of Minister Joan Burton that it would be helpful if Mr Callinan withdrew his remarks that the actions of the garda whistleblowers were "disgusting".

The spokeswoman said the views expressed reflected the views of the Labour Party.

Three other Cabinet ministers, including Minister for Transport Leo Varadkar, have now said it would be helpful for the commissioner to withdraw the remark.

Speaking to the Irish Times in Washington, Ms Burton said she believed it would be helpful if the remarks were withdrawn.

She also said there was strong merit in looking again at the idea of having an independent police authority, as such a body had worked well in other jurisdictions, such as Northern Ireland.

Mr Varadkar yesterday thanked Mr Wilson and Sgt McCabe for their actions in bringing the penalty points controversy to light.

He called on Commissioner Callinan to withdraw remarks he made about the two men before the Public Accounts Committee.

Fianna Fáil leader Micheál Martin reiterated calls for the commissioner to withdraw his comments, but stopped short of calling for his resignation.

Mr Martin said he would not “politicise” the operations of gardaí.

Meanwhile, Data Protection Commissioner Billy Hawkes has welcomed publication by An Garda Síochána of a data protection audit carried out by the Office.

However, he said he could not stand over them continuing to access the garda PULSE system and disseminating information from it.

The commissioner was speaking in advance of the publication of an audit into the garda's PULSE system.

The report, which was published this afternoon, expresses concern about the risk of disclosing highly-sensitive data, but Mr Hawkes said he is satisfied with the garda response.

The Data Commissioner also said that the Garda Commissioner would not be discharging his duty under the Data Protection Act if he allowed unlimited access to and disclosure of such information.

Garda Commissioner Martin Callinan said today that a number of gardaí have been disciplined.

It is over a year since Mr Hawkes began conducting an audit of the PULSE system.

It emerged that members of the force had been accessing information on the system about a number of high-profile public, media and sporting figures.

The records of one person who works in the modelling industry were accessed over 80 times, while another public figure was checked over 50 times.

Speaking on RTÉ's News At One, Mr Hawkes said there were enough instances of gardaí inappropriately accessing PULSE for an acknowledgement that there was an issue to be addressed and this had been done.

Clearer guidelines had been issued, he said, and proactive audits are now being carried out under an approved code of practice.

The Garda Commissioner has welcomed the results of the audit.

Mr Callinan said: "As the holders of sensitive information about individuals, An Garda Síochána takes its obligations under Data Protection legislation very seriously."

He noted that the audit found no major issues of concern in a number of areas: the garda vetting system; use of CCTV; use of subscriber data held by telecoms companies; the Automatic Number Plate Recognition system; and the charging and offender process.

He said: "I also welcome the ODPC's comment that many of its recommendations were already well advanced or completed by An Garda Síochána by the end of its audit."

Any outstanding recommendations will be implemented subject to changes to legislation and internal and external consultation, he said.

Labour TD and PAC member Robert Dowds said he agreed with calls by both ministers for Commissioner Callinan to withdraw his comments.

In a statement, Commissioner Callinan said he had been referring to the way sensitive data was accessed and not about the character of either of the whistleblowers.

Speaking on RTÉ’s Morning Ireland, Mr Dowds said he believed the commissioner should have gone further in his statement.

He said if we want Ireland to be a changed country, it has to recognise that whistleblowers play a very important role in that.

Mr Dowd said the broad thrust of Sgt McCabe's action as a whistleblower was very valuable and he deserved thanks for that.

Fine Gael TD and PAC member John Deasy also supported Mr Varadkar's comments on the issue, saying he thought the minister was "right" to say what he did.

Fianna Fáil leader Micheál Martin expressed surprise at the Taoiseach's comments that ministers should raise issues about the garda whistleblowers at Cabinet.

Mr Martin said it was a serious rebuke to the Tánaiste Eamon Gilmore, Minister for Social Protection Joan Burton, and Minister for Transport Leo Varadkar.

He added that the Labour Party and Minister Varadkar were no longer prepared to defend the indefensible. 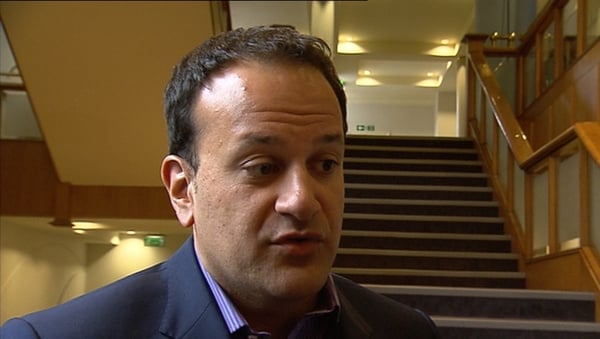