Mayor of Boston Marty Walsh has said the decision not to march in the St Patrick's Day parade was not a tough one.

Controversy has surrounded the parades in Boston and New York this year as organisers refuse to let LGBT equality groups march with their banners.

Taoiseach Enda Kenny has said he will march because the parade conditions are beyond his control.

Mr Kenny is attending a number of St Patrick's Day celebrations in Boston today, as controversy over the city's parade continues.

Mayor Walsh this afternoon confirmed that, despite extensive negotiations, he will not march in today's  parade due to the continued ban on LGBT organisations marching with banners.

In a statement, he said: "As mayor of the city of Boston, I have to do my best to ensure that all Bostonians are free to participate fully in the civic life of our city.

"Unfortunately, this year, the parties were not able to come to an understanding that would have made that possible."

Mr Walsh, whose parents were born in Connemara, has marched in the Boston parade for years.

But earlier this year he said he would not march as mayor of the city unless LGBT equality groups were also allowed to.

He succeeded in bringing the parade organisers to negotiations with the MassEquality group for the first time.

On Friday, the Boston Beer Company withdrew its sponsorship of the parade over the issue.

Mayor Walsh said that following negotiations with all parties they had managed to reach agreement to allow gay veterans to march in the parade.

But he said they could not reach agreement on allowing the group to carry an LGBT equality banner.

Mr Walsh said that it was his belief that if you were marching in a parade you should be allowed to carry a banner.

Mr Kenny will not be in the city of Boston while the parade is on today, but at the New England Irish Cultural Centre in greater Massachusets.

He said he would be walking in the New York parade tomorrow, because he had accepted the invitation and was happy to walk although he had no control over the conditions laid down by the organisers of the parade.

He said he hoped the controversy did not mar the celebration of St Patrick's Day, saying the parade in New York was an extraordinary connection between Ireland and the US and he hoped it would be a good occasion.

He said Ireland's position on the matter spoke for itself as the Government had committed to holding a referendum on gay marriage next year, to give the people of Ireland the opportunity to have their say.

Mr Kenny is the first Taoiseach to attend the political roast event, which has been running for 70 years, and is one of the biggest political events in the Boston calendar.

Mr Kenny is this afternoon to travel to the New England Irish Cultural Centre outside Boston.

From there, he will meet with business and economic groups at the Consulate General of Ireland before visiting the USS Constitution Museum.

He will then travel to New York ahead of a packed schedule celebrating St Patrick's Day tomorrow, including marching in the parade, which New York Mayor Bill de Blasio is boycotting because of the exclusion of LGBT groups.

In a one-line emailed statement to RTÉ late yesterday, Hilary Beirne said that "at this point in time we are unable to confirm the PSNI attendance".

However, a spokesperson for the PSNI said this morning that it expected its officers will take part in tomorrow’s parade.

It followed unconfirmed reports on social media that the organisers had decided to rescind the invitation for the PSNI to attend.

This was followed by a story on the Irish Central news website early yesterday that reported the organisers had come under pressure from hardline republicans in Ireland and the US to withdraw the invitation to the PSNI.

It said the committee experienced what it described as "jitters" but that the invite stood.

That report speculated that the committee would issue a statement to clarify matters. However no statement has since been issued.

Along with event chairman John J Dunleavy, Mr Beirne is considered the most senior of the parade's directors.

He is Chairman of the NYC St Patrick's Day Foundation and Executive Secretary of the city parade.

Are you celebrating the St Patrick's festival this weekend? Share your photos via email at stpatricksday@rte.ie or on Twitter @rtenews. 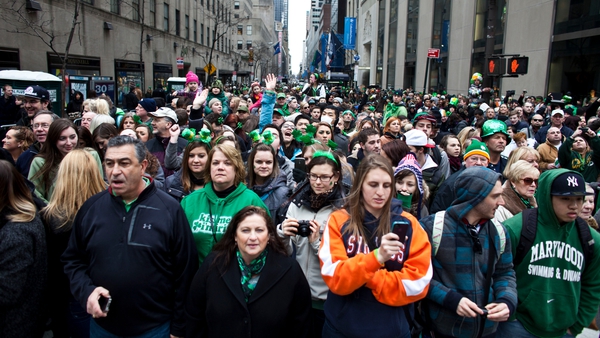