An armed pro-Russian force wearing military uniforms bearing no designated markings have sealed off another military airport in Ukraine's Crimea, a defence ministry spokesman on the peninsula said.

The 80 or so-strong group blocked off the entrance to the airport near the village of Saki and established machine-gun posts along the landing strip, the spokesman told Reuters.

The civilian group, who were wielding sticks and clubs, sought to break into the airport's control terminal, he said.

Russian forces have taken control of strategic points in Crimea, including Belbek military airport and the main civilian airport in Simferopol, without bloodshed following the overthrow of Ukrainian President Viktor Yanukovich on 21 February after a three-month revolt against his rule.

He said the Chernomorskoye base on the western edge of the Back Sea peninsula had been taken over without bloodshed at around 6am (4am Irish time).

There have been several standoffs with Ukrainian forces at military installations but the Ukrainians have not put up armed resistance.

Meanwhile, Russian President Vladimir Putin has defended breakaway moves by the pro-Russian leaders of Crimea in a phone call with German Chancellor Angela Merkel and British Prime Minister David Cameron, according to the Kremlin.

The three leaders spoke amid tensions on the Black Sea peninsula since the Moscow-backed regional parliament declared the Ukrainian region part of Russia and announced a 16 March referendum to confirm this.

"Vladimir Vladimirovich Putin underlined in particular that the steps taken by Crimea's legitimate authorities are based on international law and aimed at guaranteeing the legitimate interests of the peninsula's population," the Kremlin said.

"The Russian president also drew the attention of his interlocutors to the lack of any action by the present authorities in Kiev to limit the rampant behaviour of ultra-nationalists and radical forces in the capital and in many regions," it added in a written statement.

Ms Merkel, however, told Mr Putin the referendum violated Ukraine's constitution and was against international law, a statement from the German government said. 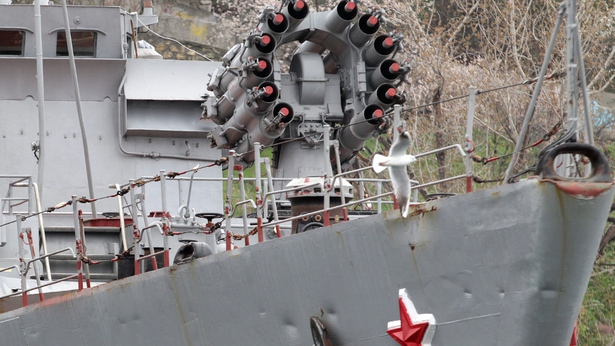 German Vice-Chancellor Sigmar Gabriel told German public broadcaster ARD that as the referendum was "against international law", it would be difficult to prevent boycott measures or economic sanctions.

"It's no secret we Germans and the government don't want this, because we know there will ultimately be no winners, but Europe cannot just stand by and watch," he said.

Mr Putin has said that Ukraine's new leaders seized power in an armed coup and that Russia has the right to invade Ukraine to protect Russians living in the former Soviet republic.

Russian officials have been increasingly portraying Kiev's leadership as radical nationalists backed by the West, but the European Union and the United States have condemned Moscow's move as interfering with Ukrainian territorial integrity.

"Despite the differences in the assessments of what is happening, they (Putin, Merkel, Cameron) expressed a common interest in de-escalation of the tensions and normalisation of the situation as soon as possible," the Kremlin said.

Ms Merkel regretted that there had not been any progress on forming an "international contact group" which could find apolitical solution to the crisis in Ukraine, the German statement said.

"She pointed out the urgency of finally coming to a substantial result on this," it said.

On Thursday, Ms Merkel said if no international contact group was formed in the coming days and no progress was made in negotiations with Russia, it was possible the European Union would impose on Russia further sanctions like travel restrictions and freezing financial accounts.

Mr Gabriel told ARD that during his meeting with Putin in Moscow last week, the Russian president had not said no to forming an "international contact group", which Germany is calling for, but he did not agree to it either.

"My impression is that the Russians are not yet aware that they hold the responsibility in their hands for the whole of Europe falling back into the time of the Cold War," he said.

In a separate interview published on Sunday, Mr Gabriel told Spiegel magazine: "We need a de-escalation and that can only happen via talks. It's not a question now of whether we react in a 'hard' or 'soft' manner; rather we have to act in a clever manner."

Asked how he found Mr Putin, Mr Gabriel said: "Friendly in his tone but firm on the issue".

Elsewhere, pro-Kiev and pro-Moscow groups clashed in the Crimean city of Sevastopol following a rally in support of Ukraine's new government.

Meanwhile, it has been announced that US President Barack Obama will meet with Ukraine's interim prime minister in Washington this week.

Mr Yatsenyuk had earlier announced in Kiev that he would travel to the United States, but gave no details of planned meetings.

Mr Blinken said the US leader has been rallying world support for the Kiev's beleaguered fledgling administration and against Russia's incursion into the Ukraine's Crimean Peninsula.

Speaking at a rally in Kiev, Mr Yatsenyuk vowed Ukraine would not give "an inch" of its territory to Russia.

"This is our land. We will not give an inch of it. Russia and its president should know that," Mr Yatsenyuk said. 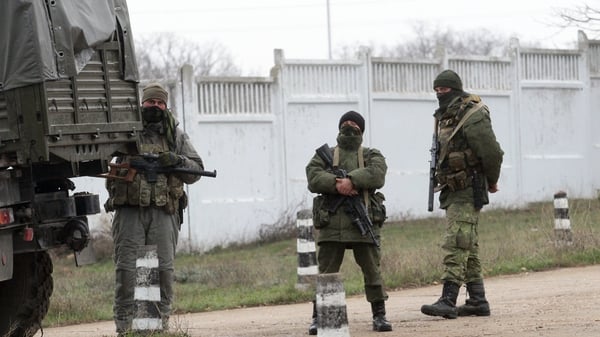