Former prime minister of Luxembourg Jean-Claude Juncker will be the European People's Party candidate for President of the EU Commission.

Voting among EPP delegates took place at the party's congress at the Convention Centre in Dublin.

The 59-year-old will now go head-to-head against Socialists and Democrats candidate Martin Schulz and Liberals candidate Guy Verhofstadt for the commission presidency.

Whichever group comes top in the European Parliament elections will have the first chance at trying to secure parliamentary backing to be commission president.

However, the decision also depends on the EU's 28 leaders backing the person for the commission.

The new commission president will assume office in November for a five-year term, replacing José Manuel Barroso, who has held the post since 2004.

The commission has principal responsibility for proposing EU legislation and takes the lead in trade negotiations and in coordinating foreign policy.

Ukraine has also dominated proceedings at the two-day EPP meeting.

Taoiseach Enda Kenny earlier played down the idea that congress might give political backing for Ukraine to become a candidate for EU membership.

Elections for the European Parliament and the Ukrainian presidency are both set to take place on 25 May.

Later, Mr Kenny said that complacency must not be allowed to take root in the European Union, despite a stabilising of the financial markets.

Addressing the congress, Mr Kenny said matters such as unemployment must be prioritised.

He said: "While calm may have descended on the financial markets, we must not allow any complacency to take root.

"It's very important that the European Union follow through and implement their decisions.

"We must prove in our determination to European people to prioritise matters that really mean something to the people of the union.

"That means a real focus on jobs and the level of unemployment especially among young people is unacceptable to anybody who has a passion and feel for politics."

U2 singer Bono addressed the delegates, telling the crowd that the "Irish people had bailed the Irish people out".

The musician paid tribute to the Taoiseach, despite the fact Mr Kenny "prefers Bruce Springsteen to U2".

He also credited the Tánaiste and the Labour party for their role in the economic recovery.

"Real leadership has cost them real votes, and I personally appreciate it," he said.

Bono said he was saving the biggest "shoutout" for the Irish people who "were screwed and fought back with dignity".

"Irish people don’t bruise easily, but we do not like the feeling of being bullied," he said.

"When the public sector had to pay for the arrogance of private sector stupidity we got both bullied and bruised, and that is not fair."

To muted applause, he said the Irish public had exited the bailout despite the Troika. 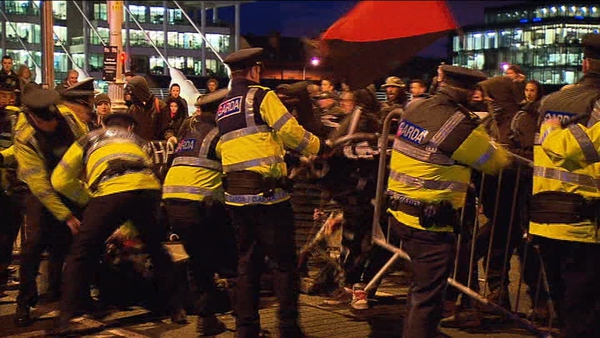