The council tonight held its third emergency meeting in four days on Ukraine, where the government says Russian troops are still pouring into Crimea, in violation of international accords.

The meeting was called by Russia to set out in greater detail its policy after being threatened by US and EU sanctions.

Mr Churkin said what he called "radical extremists" had seized power in Ukraine and were threatening the lives and legitimate interests of Russian speakers and of Russia's Black Sea fleet.

Quoting from Mr Yanukovych's letter, Mr Churkin said: "Ukraine is on the brink of a civil war. In the country there is chaos and anarchy.

"Under the influence of Western countries there are open acts of terror and violence. People are being persecuted for language and political reasons.

"So in this regard I would call on the president of Russia, Mr Putin, asking him to use the armed forces of the Russian Federation to establish legitimacy, peace, law and order, stability and defending the people of Ukraine," he read.

US ambassador Samantha Power dismissed Russian claims that Russian-speaking Ukrainians were under threat in the eastern regions of the former Soviet republic.

"There is no evidence that ethnic Russians are in danger," she said.

Ms Power said there was "no legal basis" for Russia to justify its military deployments in Ukraine through an invitation from the regional prime minister of the Crimea, adding only Ukraine's parliament could do that.

"Russia has every right to wish that events in Ukraine had turned out differently," she said.

"But it does not have the right to express that unhappiness by using military force or by trying to convince the world community that up is down and black is white."

Mr Putin declared at the weekend that he had the right to invade Ukraine to protect Russian interests and citizens.

US President Barack Obama has warned that most of the world believes that Russia has violated international law by intervening in Ukraine.

Mr Obama said Moscow had put itself "on the wrong side of history" by mobilising forces within Ukraine after the country's pro-Russian president was ousted in a popular revolt.

"I think the world is largely united in recognising the steps Russia has taken are a violation of Ukrainian sovereignty ... a violation of international law," Mr Obama said.

He said Mr Putin should let international monitors mediate a deal acceptable to all Ukrainians.

The European Union has threatened unspecified "targeted measures" unless Russia returns its forces to their bases and opens talks with Ukraine's new government.

In his first public appearance for nearly a week, Mr Putin flew to watch military manoeuvres in western Russia in what appeared designed as a show of strength.

Russia's Black Sea fleet denied reports it had given Ukrainian forces in Crimea an ultimatum to surrender by 3am tomorrow or face attack, Interfax news agency said.

The US said any such threat would be a dangerous escalation.

Ukrainian officials said Russia was building up armour on its side of the 4.5km-wide Kerch strait between the Crimean peninsula and southern Russia.

Russian forces later began shipping truckloads of troops by ferry into the Crimea region after seizing the border post on the Ukrainian side, Ukraine's border guards spokesman said.

He said Russian troops seized the checkpoint after the guards tried to stop two buses carrying seven armed men. The next ferry brought three truckloads of soldiers across.

On the ground in Perevalnoye, half-way between the Crimean capital of Simferopol and the Black Sea, hundreds of Russian troops in trucks and armoured vehicles - without national insignia on their uniforms - were surrounding two military compounds, confining Ukrainian soldiers, who have refused to surrender, as virtual prisoners.

NATO allies will hold emergency talks on the crisis in Ukraine tomorrow, for the second time in three days, following a request from Poland, a neighbour of Ukraine.

European Union foreign ministers held out the threat of sanctions against Russia today if Moscow fails to withdraw its troops from Ukraine.

It also offered to mediate between the two, alongside other international bodies.

They agreed no details of any punitive measures against Russia but EU leaders will hold an emergency summit on Thursday.

The Organisation for Security and Cooperation in Europe (OSCE) said it was trying to convene an international contact group to help defuse the crisis after Germany said Chancellor Angela Merkel had convinced Mr Putin to accept such an initiative.

Western leaders have sent a barrage of warnings to Mr Putin against armed action, threatening economic and diplomatic consequences, but are not considering a military response.

A Ukrainian border guard spokesman said Russian ships had been moving around the Crimean port city of Sevastopol, where the Russian Black Sea Fleet has a base, and Russian forces had blocked mobile telephone services in some parts of Crimea.

All eyes are now on whether Russia makes a military move in predominantly Russian-speaking eastern Ukraine, where pro-Moscow demonstrators have marched and raised Russian flags over public buildings in several cities in the last three days.

Pro-Russian protesters besieged politicians inside the regional government building in the eastern city of Donetsk, Mr Yanukovych's hometown, today in the latest such action.

Russia has staged war games with 150,000 troops along the land border, but so far they have not crossed.

Kiev says Moscow is orchestrating the protests to justify a wider invasion.

Tánaiste and Minister for Foreign Affairs Eamon Gilmore said the general view at today's meeting of the Foreign Affairs Council was that the crisis in Ukraine is the most serious that Europe has faced since the end of the Cold War.

Speaking on RTÉ's Six One News, he said there was a very strong condemnation of the action that was taken by Russia in Crimea over the weekend.

This was a clear breach of international law and there is a call on Russia to withdraw its troops to barracks, he said.

There is a very strong wish that this crisis be resolved peacefully, he said, adding that there is strong support for international organisations such as the UN and the OSCE, who are attempting to broker agreement in this situation. 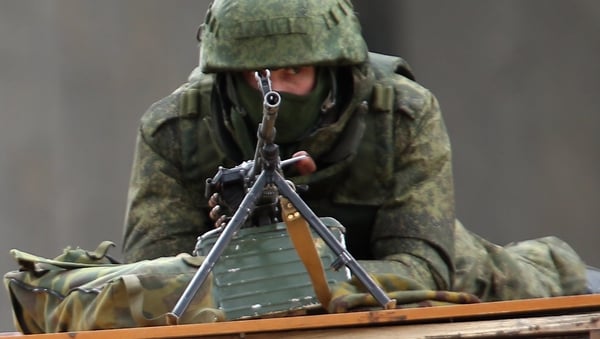