People in northern counties experienced something rather special in the skies last night - a rare glimpse of the Northern Lights.

Spectacular red and green lights of the Aurora Borealis lit up skies across several counties in the north of the island.

They were also visible in Britain as far south as Gloucestershire, Essex and Norfolk.

The Northern Lights are usually visible in only the more northern parts of Ireland and the UK.

However, a surge in geomagnetic activity last night led to them appearing much further south than usual.

The display occurs when explosions on the surface of the Sun hurl huge amounts of charged particles into space, according to the British Geological Survey (BGS).

Those thrown towards Earth are captured by its magnetic field and guided towards the geomagnetic polar regions.

Charged particles collide with gas molecules in the atmosphere and the subsequent energy is given off as light.

NASA astronaut Mike Hopkins tweeted his view of what he called the "Southern Lights" from the International Space Station.

You can share your photos of the Northern Lights in Ireland by tweeting @rtenews or emailing yourphotos@rte.ie

Fáilte Ireland has said the rare spectacle of the Northern Lights has given northern counties a boost in tourism.

The tourism organisation has said it is getting a huge number of enquiries and bookings from all over the world, especially for the Inishowen peninsula.

Spokeswoman for Fáilte Ireland in Donegal Joan Crawford said the agency will be using the Northern Lights as an initiative for people to come to the northern counties.

"In the Inishowen area we had a monstrous viewing of the Northern lights.  It was spectacular, as you would have seen today.

"This is the biggest sighting we've had but it isn't the first one. So we're already starting to see international visitors coming into the Inishowen area to view the Northern Lights. 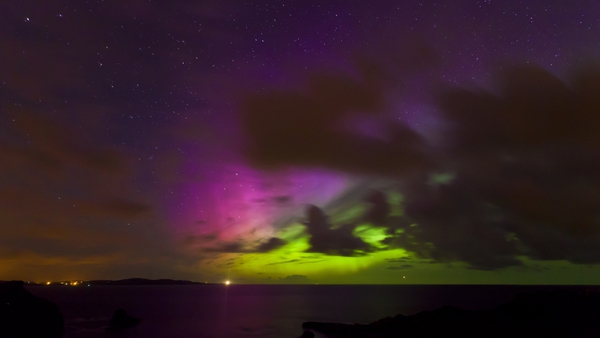