It follows the breakdown of talks aimed at resolving the long-running dispute over cuts in pension benefits at those companies.

SIPTU says it will hold a four-hour stoppage at Dublin, Cork and Shannon airports on Friday 14 March between 5am and 9am just ahead of the busy St Patrick's weekend.

The union said it was serving notice because of the companies' refusal to engage in meaningful talks or to present reasonable  or fair proposals to address the pensions problem.

They say they remain available for further talks.

The union had previously indicated that industrial action could hit the busy St Patrick's Day period and the Cheltenham races.

It is understood that Aer Lingus today ruled out increasing its offer of a €110m lump sum to offset cuts in pension benefits due to the €780m deficit in the pension scheme.

A further €30m has been earmarked to shore up benefits for former employees who have not yet retired.

A similar meeting with DAA management broke down yesterday, after the state airport company also ruled out increasing its contribution of around €50m.

The trustees of the pension scheme recently outlined their proposals for addressing the deficit.

They include cuts of 20% in benefits for those who have not yet retired, as well as reductions for retirees in line with recent legislation.

It is understood that at today's meeting, Aer Lingus management insisted that the lump sums currently on the table would be sufficient to deliver the pension benefits outlined in a recent Labour Court recommendation aimed at resolving the dispute.

However, unions are seeking increased contributions from management in both the DAA and Aer Lingus to preserve pension benefits for staff.

Behind the scenes efforts are continuing to create a talks framework which could allow all parties involved to sit down together and address the complex issues.

Aer Lingus has described SIPTU's notice of industrial action as both unhelpful and unwelcome.

It accused the union of being willing to damage Aer Lingus customers, the company, the tourism sector, Ireland's international trade and reputation, and the broader Irish economy in pursuit of its demands.

The airline disputes SIPTU's position, which it describes as seeking funding beyond what is outlined in the Labour Court recommendation.

It said it seems clear that SIPTU wishes to abandon the Labour Court recommendation in its entirety in pursuit of further funding.

Aer Lingus noted reports that SIPTU's own pension scheme is currently facing difficulties, with the threat of significant benefit cuts for members.

It accused SIPTU of believing it could hold the sponsoring employers in the aviation pension scheme to a different standard that it applied to itself.

The airline said it would communicate with customers over the coming days in relation to the potential impact on their schedule.

The DAA has warned that the four hour stoppage planned for 14 March will cause significant inconvenience to the travelling public on a bank holiday weekend.

It described SIPTU's notice of industrial action next month as deeply disappointing, unwarranted and unnecessary.

The company reiterated its commitment to invest more than €50m in upfront payments to a new defined contribution pension scheme, and to work within a previous Labour Court recommendation.

The DAA warned that while it recognised the valid concerns of staff about pension arrangements, it could not undermine its financial stability by responding to what it called unsustainable and unreasonable pension demands by SIPTU that significantly exceeded the terms of the Labour Court recommendation. 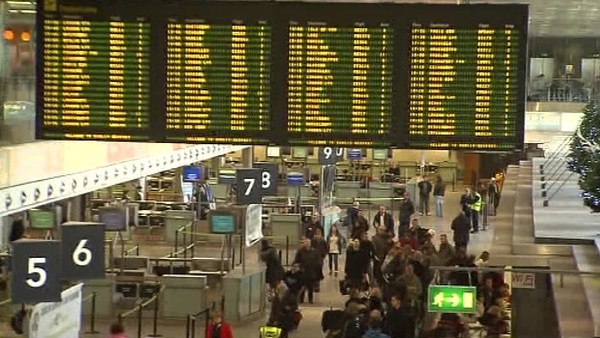