Northern Ireland Secretary of State Theresa Villiers has said any letters issued to on-the-run republicans cannot be relied upon to avoid questioning or prosecution for offences where information or evidence now or later becomes available.

Earlier today British Prime Minister David Cameron announced that a judge will be appointed to investigate the operation of a government scheme to deal with on-the-run (OTR) republicans.

He said he accepted calls for a "full, independent examination" of the process after Democratic Unionist First Minister Peter Robinson threatened to resign.

Details of 187 letters sent to so-called on-the-run republicans, assuring them that they would not be prosecuted if they returned to Northern Ireland, emerged when a case against a man charged with the 1982 IRA Hyde Park bomb collapsed.

"I agree with the First Minister of Northern Ireland that, after the terrible error in the [John] Downey case, it is right to get to the bottom of what happened," Mr Cameron said.

"The case has already been referred to the Police Ombudsman but, as the First Minister has said, we should have a full, independent examination of the whole operation of this scheme.

"So I can announce today that we will appoint an independent judge to produce a full public account of the operation of this administrative scheme to determine whether any other letters were sent in error."

The judge will be given "full access to government files and officials" and will report by May, Mr Cameron said, with the findings being published.

However, the Liberal Democrat leader warned against allowing the Downey case to escalate into a "full-blown political crisis".

It emerged this week that the Tony Blair-led government had agreed with Sinn Féin a process to allow individuals establish if they were on police wanted lists and to provide them with letters setting out their situation.

More than 30 of the 187 letters were issued since Mr Cameron took over as prime minister in 2010.

Mr Robinson, who has claimed he and other Stormont ministers were kept in the dark over the OTR deal, said yesterday he would walk away from the coalition Executive if a judicial inquiry was not called and the letters rescinded and gave ministers 24 hours to respond.

This afternoon he said the circumstances in which he would resign have passed because the issues he raised with the British government have been addressed.

Details of the OTR deal emerged during the failed prosecution of Downey, from Co Donegal, over the Hyde Park attack.

The 62-year-old denied murdering four soldiers in the 1982 bombing in London.

The case against him was ended because government officials mistakenly sent him a letter in 2007 telling him he was no longer a wanted man.

Mr Cameron repeated his view that the Downey case involved a "dreadful mistake made by the PSNI".

"It is important to set out the facts of what has happened," he said as he addressed the issue at a Downing Street press conference following talks with German chancellor Angela Merkel.

"When we came to power in 2010, we inherited a process where letters were sent, setting out the factual position on whether or not some individuals were wanted for questioning by the police.

"This process continued under this government. There was never any amnesty or guarantee of immunity for anyone, and there isn't now."

He went on: "It is right that we take swift action but let us also remember that Northern Ireland has made great strides forward as a result of the peace process.

"It is vital that we deal properly with the events of the past but make sure this never undermines our determination to build a shared and prosperous future for the next generation so that we never again return to the horrors of the past."

The DUP has yet to indicate whether the Prime Minister's announcement will satisfy Mr Robinson, as it did not contain a specific pledge to rescind any letters.

While Mr Cameron has said the inquiry will examine whether any other letters were sent in error, many unionists are angry that any letters were sent at all, with Mr Robinson having demanded an inquiry into the policy itself.

He insisted they were only given to those republicans who the authorities had no interest in, claiming that on-the-runs who detectives were pursuing were told they would be arrested if they returned to Northern Ireland.

"A very important part about this issue is that those names that were put forward, those people were told no charges could be proceeded with or brought against them.

"There were also another smaller number of names that people were told that charges would be proceeded with if they returned to the north.

"So that information blows out of the water this argument of amnesty or immunity or get-out-of-jail card."

The veteran republican claimed that threats to collapse the administration were an attempt by unionists to distract from the fact they knew the OTR process existed.

Responding to Mr Robinson's threat to resign - a move that would trigger an Assembly election - Mr McGuinness insisted such drastic action would achieve nothing.

"This is certainly not the time - though I don't fear it at all - for an election."

Mr McGuinness said he would never voluntarily walk away from the devolved institutions.

"I will never resign," he said after meeting Northern Ireland Secretary Theresa Villiers to discuss the issue this morning.

DUP claims that it was unaware of the deal between the Government and Sinn Fein on OTRs have been questioned after it emerged that senior Police Service of Northern Ireland (PSNI) officers have previously briefed members of the PSNI's scrutiny body - the NI Policing Board - on elements of the scheme, albeit without mention of the letters.

DUP members were present at the Policing Board meetings. The issue was also mentioned in the high-profile 2009 Eames-Bradley report on dealing with the legacy of the Troubles and in a book by Tony Blair's former chief of staff Jonathan Powell.

Mr McGuinness said: "I think that the angst among unionist politicians is more centred around the common belief out there in society and in the media that they knew all about this.

"They may not have known about the letters, but they knew about the scheme and they knew that these people who were described as on-the-runs were being processed.

"I think that's where the annoyance comes from."

Trimble knew nothing about letters

Former first minister David Trimble has insisted he knew "absolutely nothing" of the letters, and said he believed the British government had conspired with Sinn Féin.

"I would dearly love to know who signed off on that," he told BBC Radio. "I don't know anybody who knew about it."

Meanwhile, Northern Ireland's Justice Minister David Ford has said he was not informed about the process.

Mr Ford, who is the leader of the Alliance Party leader, said he supported Mr Robinson's call for an inquiry.

Taoiseach Enda Kenny has said the Department of Foreign Affairs was involved in issues surrounding the case of Mr Downey.

Mr Kenny said the issue of on-the-runs had been a central issue since the Good Friday Agreement.

He said there was a democratic mandate that had to be fulfilled.

Mr Kenny said he hoped the Assembly and power-sharing executive will deal with the issue in a pragmatic fashion. 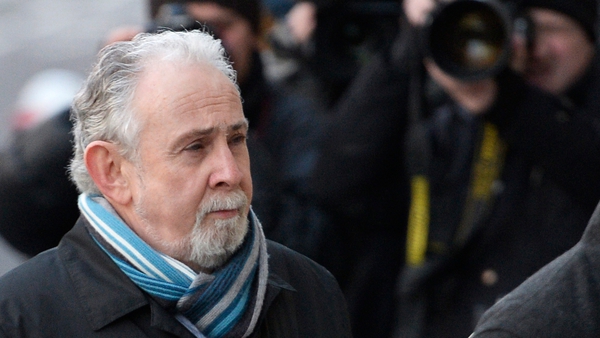