The Government has appointed Seán Guerin SC to "conduct an assessment of various issues and allegations" raised by garda whistleblower Sergeant Maurice McCabe since 2008.

Taoiseach Enda Kenny made the announcement in the Dáil.

He was responding after Fianna Fáil leader Micheál Martin said the family of murdered woman Sylvia Roach Kelly met him yesterday and told him that until recently they were "never told anything about the totality of the murder of their daughter and mother".

He said the Government made three decisions at this morning's cabinet meeting.

Mr Kenny said it had been decided that an amendment will be added to the protected disclosures bill, an internal confidential recipient will be appointed, and that Mr Guerin would be appointed to conduct the assessment.

Mr Guerin will "examine and assess" all relevant papers and will recommend further action, the Taoiseach said.

Mr Martin tonight said that Mr Kenny had confirmed to him that Sgt McCabe would be interviewed by Mr Guerin as part of his investigations.

Mr Kenny earlier told the Dáil that statements will take place in the Oireachtas all day tomorrow.

He said they will be led by Minister for Justice Alan Shatter.

Those statements will "finish up" with a questions and answers session for anyone who wishes to ask them.

The announcement follows more controversy over allegations that serious crimes were not investigated properly.

The Cabinet also assessed internal correspondence from the Department of Justice with Sgt McCabe.

The decision to appoint the barrister follows calls from the Opposition for an independent inquiry.

Sgt McCabe last night rejected claims that he was instructed by Commissioner Callinan to take part in an inquiry into the allegations that penalty points had been cancelled.

In a detailed statement seen by RTÉ's Prime Time, Sgt McCabe said he was never contacted by the investigation team and never withheld any information or cooperation from the inquiry.

The whistleblower has accused gardaí of making "gravely misleading and false" claims.

Sgt McCabe said the direction issued by the commissioner concerned his accessing the Garda's PULSE system regarding the cancellation of fixed charge notices and that he should "desist" from doing so.

The commissioner said he issued a direction to Sgt McCabe on 14 December 2012 to cooperate with the investigation being carried out by Assistant Commissioner John O'Mahony.

Assistant Commissioner O'Mahony told the Public Accounts Committee he did not engage with Sgt McCabe during the investigation because of the information he himself had from the Garda's PULSE computer system.

"I found what was on PULSE did not accurately reflect what they [the whistleblowers] were alleging," he said.

Speaking before this morning's Cabinet meeting, Minister for Public Expenditure and Reform Brendan Howlin said the general view of the Government is that there is complete confidence in An Garda Síochána and that it should be accountable in every way.

Mr Howlin said he understood how there can be so much contradictory information around the controversy because of his experiences with the McBrearty affair in Donegal.

He also said he understood how complex these issues can become and how they need to be unravelled calmly and clearly.

Asked about the latest statement by Sgt McCabe, Mr Howlin said he had only heard about it on RTÉ's Morning Ireland.

He said he is bringing legislation through the Oireachtas to ensure that anyone who works in the public or private sector can expose wrongdoing with absolute impunity.

The Cabinet decided last week to appoint a retired High Court judge to look into claims that the Garda Síochána Ombudsman Commission offices were bugged.

Fianna Fáil has described the decision to appoint a barrister as disappointing and an "unbelievably weak response".

Its justice spokesperson Niall Collins said: "This latest development is, quite simply, unbelievable.

"The Government should not need a senior counsel to advise on what is the right thing to do.

"The Government's effort seems to have moved from getting to the truth, to establishing a method to avoid a thorough examination.

"This falls far short of what is needed and will only serve to further undermine public confidence."

Meanwhile, Sinn Féin leader Gerry Adams has said time should be set aside today for the Dáil to discuss the latest issues in the controversy.

"The cases allegedly include such serious issues as murder, abduction and assault," he said.

"There is also the allegation that the Minister for Justice was aware about these cases for two years but failed to take action.

"Given the gravity of these claims and the urgent need for public confidence in the policing and justice system in this State, it is imperative that the Dáil discusses these matters."

Minister for Transport Leo Varadkar has said the Government is taking the garda whistleblower's allegations seriously and this is reflected in its decision to appoint a senior council to review the facts of the case.

He said: "None of us know if these allegations are true, they are just allegations so we have appointed a senior council to look at them".

Independent TD Mick Wallace has called on both the Garda Commissioner and Minister Shatter to resign.

He described the directive issued to Sgt McCabe to stop searching the garda computer system and disseminating data as a "gagging order".

Speaking on RTÉ's Morning Ireland, Mr Wallace said: "I think if you read it fully, it's pretty obvious that this is a gagging order and not an invitation to come before an investigative body.

"The tone of it is very aggressive and it really amounts to bullying and intimidation." 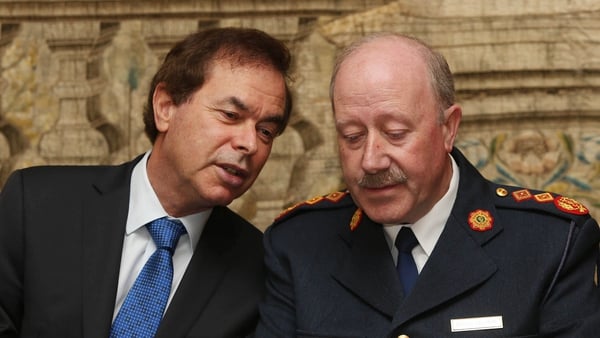