A sit-in by protestors at the headquarters of property company Allsop Space in Dublin has ended after the company agreed not to offer any property for sale, which is subject to legal dispute between registered owners and banks or receivers.

The agreement emerged after seven hours of talks at the building in Lower Baggot Street, Dublin city centre between Allsop Space management and the group calling itself “The Friends of Banking Ireland”.

The group, which forced an Allsop auction to be abandoned last July, has given an undertaking not to obstruct any future auctions as part of the agreement.

Allsop Space's latest auction of 191 distressed properties is due to take place in the RDS tomorrow.

Among the lots being offered for sale are 81 houses, 17 apartments, two shopping centres, a number of parcels of land and other commercial properties.

It is understood that 16 people from various parts of the country had turned up at the building to stage a protest before being admitted to a meeting with company management. 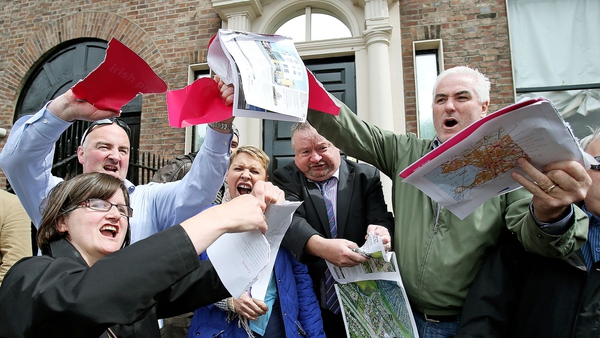