The scuffles came a day after the protest punk band's members Nadezhda Tolokonnikova and Maria Alyokhina were detained by police in the Russian Black Sea resort for several hours in connection with a theft case.

The latest fracas over their stay in Sochi came as the International Olympic Committee warned the girls that it would be "wholly inappropriate" to stage actions outside the Olympic venues.

The clash took place as Pussy Riot members sought to stage an action in the centre of Sochi.

They donned the coloured balaclavas and tights that are their group's trademark, but they were immediately surrounded by uniformed security personnel who appeared to be Cossacks.

The women were whipped repeatedly with horsewhips and roughly handled, video footage showed. At one point, Ms Tolokonnikova was thrown to the ground and her coat thrown on top of her.

Cossacks, clad in their national clothes, are often seen helping the police with their work in the south of Russia in line with a tradition dating back to Tsarist times.

Ms Tolokonnikova herself wrote on her Twitter feed that the group had been attempting to stage a new performance entitled "Putin will teach you to love the motherland".

The women went to Sochi hospitals for medical treatment and Ms Alyokhina later posted a picture of Ms Tolokonnikova in the hospital bed next to her.

Ms Tolokonnikova said her husband Pyotr Verzilov has suffered in particular due to the use of an unidentified spray.

The governor of the Krasnodar region which includes Sochi, Alexander Tkachev, said the incident had to be investigated, even if the views of Pussy Riot do not reflect the majority. "All the guilty in what took place should be punished," he said.

Both band members were sent to penal colonies on a two-year hooliganism sentence for performing an anti-Putin song in a Moscow cathedral in 2012. However, they were freed early on amnesty in December last year.

The IOC distanced itself from the controversy over the arrest on Tuesday, which rights groups described as a public relations disaster that cast a new shadow over the Games.

"I understand that it (the arrest) was not in the context of a protest against the Games," IOC spokesman Mark Adams said.

Asked whether Pussy Riot would be able to stage a protest inside the Olympic Park where the main venues are located, Mr Adams replied: "If they did it would be wholly inappropriate." 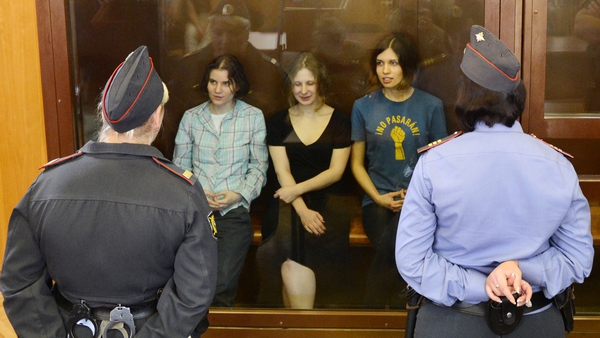