Just days after a Copenhagen zoo sparked global outrage by putting down a healthy giraffe named Marius, another Danish zoo says it may do the same thing.

The Jyllands Park Zoo, near the town of Herning, said that it may have to kill one of its giraffes, coincidentally also named Marius, because his genes make him unsuitable for breeding.

"We can't keep him if we get a female, because then we would have two males that would fight with each other," zoo keeper Janni Loejtved Poulsen said.

Seven-year-old Marius is healthy but is less of a priority for breeders since his genes are already represented in the European Endangered Species Programme (EEP), which the zoo joined just over a year ago.

The zoo received a purebred male in April that is considered a higher priority by the EEP.

"We have received one male giraffe that is highly ranked genetically, and it's up to the breeding coordinator when they have another purebred giraffe for us," Ms Loejtved Poulsen said.

If the European organisation is unable to find Marius a new home, the Jyllands Park Zoo will have to put him down, she said.

The news drew fresh criticism from animal rights activists and among those joining the fray was Chechnyan leader Ramzan Kadyrov, who said the giraffe was welcome in the North Caucasus republic.

"I am ready to accept Marius out of humanitarian concerns," he wrote on his Instagram account, adding that they could "guarantee to him good conditions and healthcare" and that he wanted to avoid another "bloody show".

Last week, the scientific director of Copenhagen's zoo received death threats after Marius, a healthy 18-month-old giraffe, was put down despite numerous offers for him to be rehoused and thousands signing an online petition to save him.

The animal was later skinned and dissected in front of visitors, many of them children. Its meat was then fed to lions.

Copenhagen Zoo said it had no choice other than to prevent the animal attaining adulthood, since under European Association of Zoos and Aquaria rules, inbreeding between giraffes is to be avoided.

Many Danes have been surprised and even angered by the international outrage over the giraffe, and a video of the zoo's scientific director Bengt Holst putting a British news presenter "in his place" went viral in Denmark this week.

"It's not cruel, it's natural and carnivores live from meat," Mr Holst told Channel 4 News. 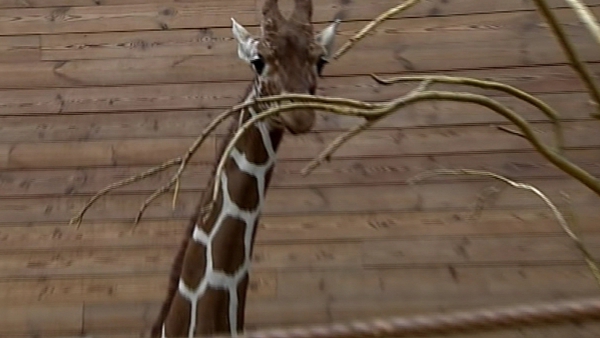