A portrait by 20th century Irish-born painter Francis Bacon has sold at Christie's auction house in London for £42.2m (€51m), making it the most expensive post-war art work ever sold in the UK.

The portrait of George Dyer was sold to an anonymous telephone bidder.

The 1.83m tall canvas of Dyer, Bacon's former lover and muse, was expected to fetch around £28m, but the sale smashed the estimate.

Dyer died of an overdose in Paris two days before the painting was displayed at Bacon's first major retrospective at the Grand Palais in 1971.

The piece, called George Dyer Talking, is the most significant large-scale portrait of Dyer to be offered at auction in more than a decade.

The most expensive of Bacon's work was his triptych of Lucian Freud, which sold for £85.3m at Christie's New York in November 2013.

A depiction of Mickey Mouse by acclaimed artist Damien Hirst was also auctioned off for £902,500, with all the proceeds going to children's charity Kids Company.

Hirst's work, which represents the figure of the Disney character with a series of large circles, was expected to fetch £300,000.

Kids Company was founded by Camila Batmanghelidjh in 1996 to provide practical, emotional and educational support to vulnerable inner-city children and currently helps 36,000 children across London and Bristol. 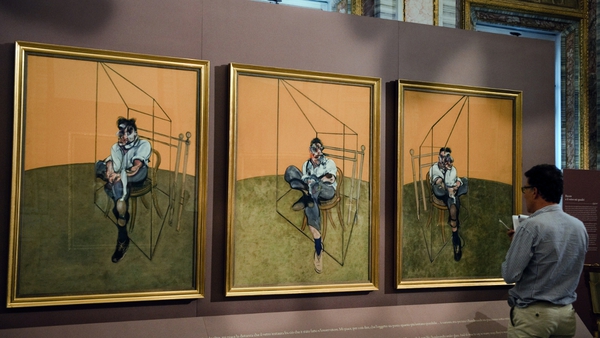