Tallaght Hospital in Dublin has said it has cancelled some non-urgent surgery and day case procedures because of overcrowding.

It comes after the Irish Nurses and Midwives' Organisation and SIPTU yesterday expressed "grave concerns" about overcrowding and staffing levels at the hospital.

It has also emerged that the Health Information and Quality Authority has been notified of a "critical incident" after a patient had a cardiac arrest in the emergency department.

A patient in a cubicle was found to be in cardiac arrest when the medical team went to review him on Tuesday evening.

The patient is currently in the intensive care unit.

Tallaght Hospital CEO David Slevin said the incident was under review and no further comment could be made at this time.

Speaking this morning, Mr Slevin confirmed that 30 day case procedures have been cancelled today and tomorrow.

The hospital is experiencing an unprecedented surge in the number of people attending, he said.

But he said it is not the case that the health of patients is under threat.

The situation is being managed and the hospital is able to give adequate patient care, he said.

He said the trolley situation was improving with 19 people on trolleys this morning.

Plans are in place to free up more beds, he said, and there are also daily ward rounds to try to increase the number of patients being discharged.

The hospital this afternoon said it is satisfied that there have been no exceptional incidents in its emergency department in recent days arising from staffing issues or resource pressures.

Speaking on RTÉ's Morning Ireland, he said: "This year alone there were some 348 patients on trolleys in Tallaght Hospital.

"This is despite the HIQA report in 2012, which stated this practice did not provide dignity for the patients there."

A meeting with hospital management is to take place tomorrow to discuss the concerns.

Mr Reilly added that while he has full confidence in the staff of Tallaght Hospital, the emergency department is not fit for purpose.

Mr Slevin said an additional 37 nurses have been recruited since August last year and a recruitment drive for specialist nurses was under way.

He said there are currently three permanent nursing vacancies within the emergency department, but said the hospital was actively seeking to fill them.

In total there are 28 vacant nursing posts that Mr Slevin said he hoped would be filled by the end of the first quarter of this year.

In a statement this morning, a hospital spokesperson said it is implementing a response plan to deal with the current pressures on the emergency department.

The statement adds that some cancellations of non-urgent elective and day case surgery have occurred and "while this is clearly an undesirable situation, it is not untypical at this time of the year". 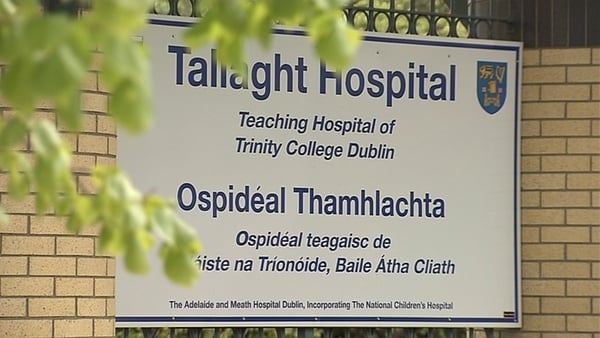 INMO and SIPTU have 'grave concerns' about Tallaght Hospital