Ukraine has also sharply criticised Germany after comments by its foreign minister that sanctions should be used as a threat unless a political solution was found soon to end the crisis.

At least six people have been killed in the past two weeks in unprecedented politically-linked violence in Kiev, whose centre is now a heavily-barricaded fortified protest zone.

Fierce clashes between riot police and squads of radical protesters have prompted global concern that the country might plunge into civil war.

Though there has been no violence in Kiev for several days, Western governments have warned President Viktor Yanukovych that it risks flaring up again unless he can find a compromise with the opposition.

Mr Yanukovych triggered the uprising on the streets last November when he walked away from a trade deal with the European Union in favour of closer economic ties with Russia.

Though his move was rewarded with a $15-billion offer of credits and cheap gas from Moscow for Ukraine's ailing economy, it provoked outrage among millions of Ukrainians who dream of a European future for their country.

The United States and its EU allies are backing the protesters, though largely with words rather than deeds or cash.

The foreign ministry called in Berlin's ambassador to Kiev and said later in a statement: "It was emphasised that there was a need for an objective assessment of the development of the internal political processes of the situation in our state and that provocative statements should be avoided."

Mr Yanukovych, according to reported comments by a political ally, has said he will not use force to clear the streets, where hundreds of protesters are camped out on Independence Square or in occupied municipal buildings.

The opposition pressed in parliament for a return to a previous constitution, which would mean Mr Yanukovych losing some of the key powers he has accumulated since being elected in 2010.

These include appointing the prime minister and entire government as well as regional governors.

"One of the ways out is the redistribution of powers held by the authorities. After that we can be more certain of changes in the country," said boxer-turned-politician Vitaly Klitschko, one of the main opposition leaders. 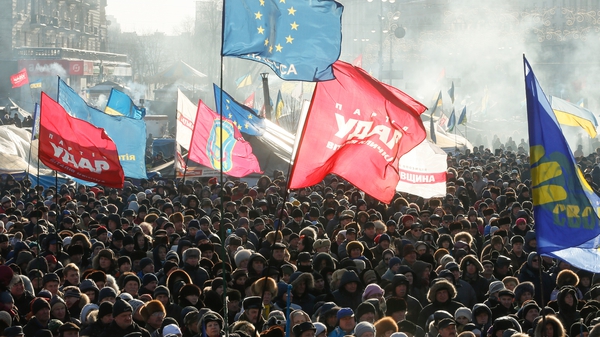