Minister for Health James Reilly has told the Dáil that new figures show a 95% reduction in those waiting over 12 months for an outpatient hospital appointment.

Mr Reilly said the statistics showed nearly all of adult patients on the elective waiting list were waiting less than eight months.

He said 95% of children waiting for inpatient or day case surgery were waiting under 20 weeks, while nearly all patients waiting for routine endoscopy procedures were waiting less than 13 weeks.

The total number of medical and surgical patients waiting for inpatient or day treatment was over 56,900.

Separately, the number of people waiting to be seen at an outpatient clinic fell by 7% to 357,624.

In September, Minister Reilly promised that by the end of December 2013, no adult would be waiting over eight months for a planned operation and no child more than 20 weeks.

Meanwhile, there were 410 patients on trolleys in hospitals around Ireland today, according to figures from the Irish Nurses and Midwives' Organisation.

The worst-affected hospitals are Connolly Hospital Blanchardstown with 35 patients on trolleys; the Midland Regional Hospital in Mullingar with 32 patients; University Hospital Limerick with 31 and Our Lady of Lourdes in Drogheda where 30 patients are on trolleys.

Of the 410 patients waiting, 323 are in emergency departments and 87 are on wards awaiting admission. 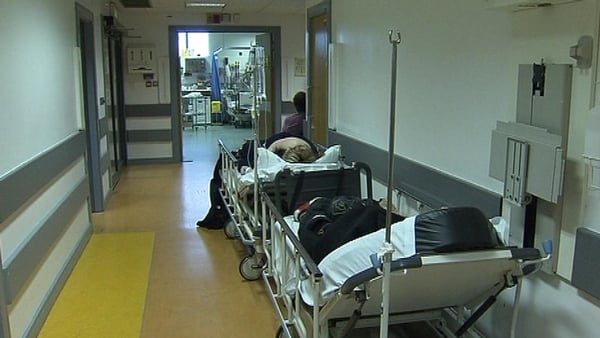