An investigation into a plane crash in Cork in which six people died has found that Spain's aviation regulator contributed to the crash through inadequate oversight of the Spanish company that operated the fatal flight.

The final report, published today, of the investigation into Ireland's worst aviation crash in almost 50 years also found deficiencies on the part of the operating company, Flightline.

The Manx2 flight from Belfast to Cork crashed in dense fog at Cork Airport in February 2011.

A preliminary report and two interim statements from the Department of Transport's Air Accident Investigation Unit told how bad decisions by the crew led directly to the crash.

Today's report stated the crew did not give adequate consideration to the weather conditions in Cork.

It also found that the crew breached minimum weather standards during each of three attempts to land the plane.

The captain also performed a manoeuvre reversing engine thrust, which is prohibited in flight.

The report found that both the captain and the co-pilot had insufficient rest prior to commencing duty on the day of the accident and were likely to have been suffering from tiredness and fatigue at the time of the accident.

Captain Jordi Sola Lopez, 31, from Barcelona, had only been promoted four days prior to the crash.

His co-pilot, Andrew Cantle from Sunderland in England, only joined the airline three weeks before the crash.

The report found their pairing together on the flight was "inappropriate".

It described as inadequate Flightline's supervision of the service, as well as the oversight of Flightline by Spanish aviation regulator AESA.

It said both of these were a contributory cause of the crash. 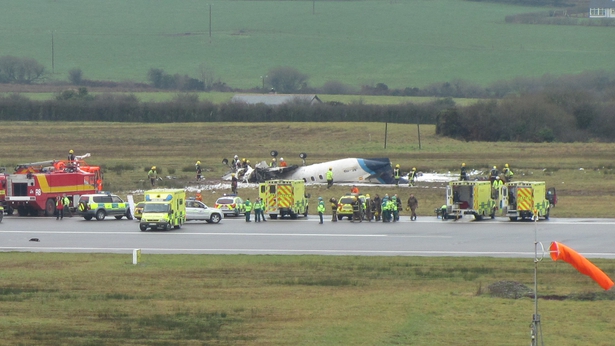 The report said the flight captain was inadequately trained in the command role and was ill-prepared for the situation he found himself in on the day of the accident. The co-pilot's training was not completed.

Some of Flightline's operational responsibilities were being inappropriately exercised by Air Lada and Manx2.com.

In relation to AESA, the report said there was no oversight of Flightline's service in Ireland and that AESA said it was "unaware" that Flightline was operating in Ireland, in spite of having regulatory responsibility for the company.

The report recommended that AESA reviews its policy regarding oversight of the carriers for which it has regulatory responsibility, particularly those conducting "remote" operations in other countries.

The report addressed four of its 11 safety regulations to the European Commission directorate responsible for commercial air transport. It is believed to be the first time an air accident investigating team has done this.

The report was sent to the six survivors and to the families of those who died over a week ago.

Its findings will be closely examined, not least by the legal teams pursuing law suits on their behalf.

Meanwhile, the solicitor representing the majority of the survivors and two of those who died in the crash has said it is critical that the findings are followed up.

James Healy-Pratt, partner with aviation law specialists, Stewarts Law, told RTÉ's News At One that these recommendations are a critical part of the report.

He said the families have praised the AAIU for its comprehensive report and that its findings reveal a low-safety, low-cost airline operation.

Mr Healy-Pratt said it shows there were systemic failures from a regulation perspective, but also from a flight operations perspective.