The incident commander in charge of the fire at the Oxigen waste recycling plant in Ballymount, Dublin has said the fire is now contained.

District Officer Brendan Mc Nicholls said they are working with gardaí to put a traffic management plan in place for businesses in the industrial estate tomorrow.

Oxigen Environmental has said it hopes to relocate as many employees as possible.

Fire services have said it may be a further 24 hours before a forensic examination can be carried out to determine the cause of the fire at the Merrywell Industrial Estate.

A spokesperson for Oxigen said the company has "no indication whatsoever" of what started the blaze in the early hours of yesterday morning.

A building which housed waste processing systems has been completely destroyed.

The company's administrative offices and the majority of its fleet has been unaffected.

Oxigen said around 60 staff who work in the processing building will be affected and it is hoping to relocate as many as possible to other facilities in nearby locations.

In total around 120 people are employed at the Oxigen plant.

"Every effort will be made to relocate as many employees as possible," said spokesperson Martin Harrell.

The company said it hopes to be in a position to update staff within the next 48 hours and is actively looking at redeployment measures.

Oxigen is looking at 25 other sites in ten counties, including facilities that are local to the site that was affected.

Mr Harrell said some jobs may be at risk as the possibility of a full redeployment would be very difficult.

Meanwhile, traffic diversions have been issued by gardaí, local access can be allowed at the following cordon points: 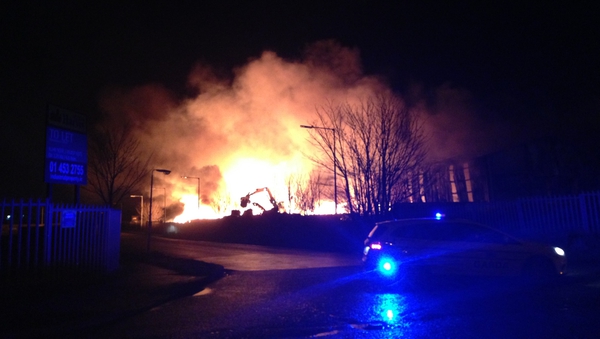