A member of the Dáil Public Accounts Committee has described as "almost disdainful" the attitude of the Garda Commissioner during his appearance before the committee yesterday.

Independent TD Shane Ross said he thought it was "extraordinary" that Martin Callinan said the committee was not the platform through which whistleblowers should give information.

Speaking on RTÉ's Morning Ireland, Mr Ross said: "He was almost disdainful of the Public Accounts Committee, which is after all a democratic forum.

"He then went on to say that they [whistleblowers] should be dealt with by me, myself - meaning that he was important enough to do it, but not us.

"He went on to talk about being usurped by subordinates, which was an extraordinary phrase to use - again regarding his 'subordinates', as he calls them, as being second class citizens when they have every right to express a view, an opinion, and give evidence in public."

In response, Mr Callinan said this afternoon that he has the height of respect for the PAC and that it does extremely important work.

He said he does not want to do anything to hamper that situation, but he said he has to watch his own back yard.

Mr Callinan said he intends to be as transparent as he has to be in providing information to the committee.

Yesterday, Mr Callinan said speaking at the PAC was not the proper forum for gardaí to make serious or criminal accusations against colleagues.

He said using that platform to discuss such matters would have an adverse effect on discipline within the force.

The commissioner confirmed that he would be taking legal advice over the proposed appearances of two garda whistleblowers at the committee next week.

PAC Chairman John McGuinness has said a number of politicians have suggested caution in relation to the appearance of a whistleblower before the committee next week.

Mr McGuinness said PAC is above politics and it does not want interference from any political party.

He said it has invited the whisteblower to appear before it on foot of his correspondence and it will be cautious and act within its remit.

Mr McGuinness said members had yet to decide it they will hear the whistleblower's evidence in private or public.

Minister for Communications Pat Rabbitte has said Mr Callinan is the accounting officer and is therefore accountable to PAC for the spending or wasting of money in the force.

In relation to other witnesses attending, he said: "If a committee is satisfied that they have a credible witness, then it seems to me they are perfectly entitled to question him so long as he doesn't reflect on the character of colleagues who are not there to defend themselves."

Chief executive of Transparency International Ireland (TII) John Devitt said Mr Callinan appeared to be "flouting his own regulations" in regard to whistleblowers.

Mr Devitt said that under regulations introduced in 2007 to prevent any reprisals or threat of disciplinary action against whistleblowers, the two gardaí who wanted to give evidence about the penalty points system to the PAC were entitled to protection.

Speaking on Morning Ireland, Mr Devitt reiterated TII's call for the whistleblowers to be protected, as they had made the information available in a lawful and responsible manner.

He said: "We've called on the Garda Commissioner to withdraw his comments and to withdraw any threat of disciplinary action against Maurice McCabe (the serving garda sergeant).

"He's legally entitled to report his concerns to members of the Oireachtas, including members of the Public Accounts Committee, under the Garda Act 2005."

Transparency International Ireland is the Irish chapter of a worldwide movement against corruption.

Mr Devitt said that while the Garda Commissioner might feel "betrayed", the loyalty of gardaí was to those they served - the public.

Independent TD Clare Daly accused Mr Callinan of trying to minimise the seriousness and systemic nature of what she described as the culture of terminating fixed charge notices.

Ms Daly said during his appearance before the PAC, the commissioner had used the platform to warn any other gardaí who might be interested in whistleblowing.

Speaking on RTÉ's Today with Sean O'Rourke, she said he had gone on "a major attack" on the two whistleblowers who had come forward with allegations about the penalty points system.

She also said it would be very regrettable if the Garda Commissioner took legal action to prevent the committee from hearing evidence from the two whistleblowers. 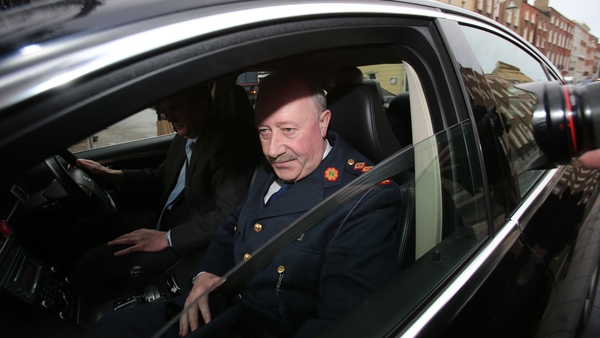