A wave of bomb attacks across Cairo have killed six people and raised fears that an Islamist insurgency is gaining pace.

The attacks came on the eve of the third anniversary of the uprising that toppled former president Hosni Mubarak.

The insurgency has been gaining pace since the army toppled Islamist President Mohammed Mursi in July.

In the most high-profile attack, a suicide car bomber struck a top security compound in central Cairo early in the morning and killed at least four people.

Another blast in the Dokki district killed one person.

An explosion near a cinema on the road to the Pyramids of Giza on the outskirts of Cairo also led to one death.

Another 11 people have died in recent clashes in the capital and several other cities between Mr Mursi's supporters and security forces.

There was no immediate claim of responsibility for the suicide attack in the car park of the Cairo Security Directorate.

Prime Minister Hazem el-Beblawi condemned the bloodshed in a statement.

He said it was an attempt by "terrorist forces" to derail the army-backed government's political road map, which is meant to lead to free and fair elections.

The White House condemned the attacks and urged all sides to avoid violence.

"These crimes should be investigated fully and the perpetrators should be brought to justice," White House spokesman Jay Carney told reporters. 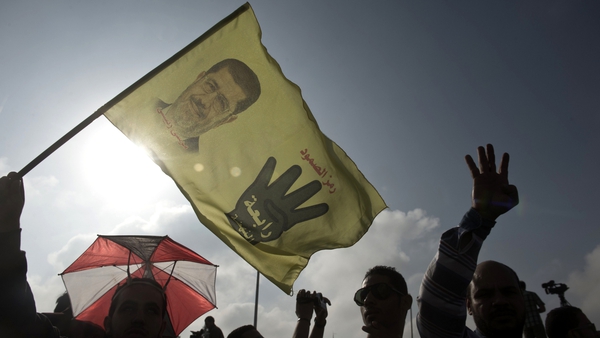