A winter storm packing snow and Arctic cold has hit the northeastern United States, grounding 3,000 flights and shutting down governments and schools.

States across the northeast declared emergencies and warned residents not to travel during the fast-moving storm, which packed a potentially lethal combination of snow and wind, backed by temperatures up to 30F (17C) below normal.

Bruce Sullivan, a senior meteorologist at the National Weather Service, said: "Behind this system is a lot of strong winds, (with) very cold, bitter temperatures, so this snow is going to be around for a while."

Hundreds of thousands of federal workers in Washington were ordered to stay home.

City schools and offices also shut down, and the White House called off its press briefing yesterday.

But the Supreme Court remained open to hear cases, and organisers of the annual anti-abortion March for Life said today's rally would go on regardless of weather.

About 3,000 airline flights in the US were cancelled, according to the FlightAware.com tracking service. The bad weather left thousands of air travellers wondering when they were going to get home.

Hours after he was sworn in to a second term, New Jersey Governor Chris Christie declared a state of emergency, as did  Delaware Governor Jack Markell.

Mr Christie's inauguration party on Ellis Island was cancelled because of the looming storm.

In Connecticut and Virginia, state officials warned residents not to travel if they did not have to.

Some schools in North Carolina closed early, and schools were shut across Virginia and West Virginia. Connecticut closed all its schools for today.

While the polar front grips the eastern US, the western half will see above-average temperatures as a drought worsens, the National Weather Service said.

Mr Sullivan said the cold snap would be followed by two more polar fronts through the weekend. 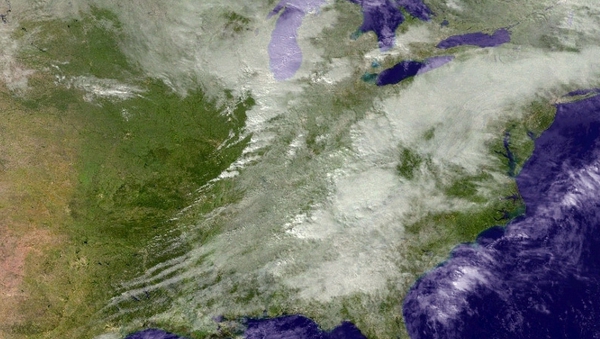 Severe weather experienced in US midwest