Galway County Council estimates that it will cost over €18m to repair recent storm damage.

Councillors from the Connemara electoral area met officials this afternoon to discuss the clean up effort.

They are considering an initial submission on the cost implications but the Council has stressed that in many instances it is impossible to give an accurate assessment, as clearing operations still have to be completed.

The local authority describes the impact of the storm as the worst such event in living memory all along the Co Galway coastline.

The council breaks down repair costs under a number of headings:

€2m is needed for road repairs for after over 100 stretches were damages across the county.

€6.5m is needed for damage to coastal protections of roads on the mainland and off shore islands.

Breaches of natural defences will cost €3m to put right.

Around €2m worth of damage has been done to piers and harbours at several locations, including Inis Oírr, Inis Meáin, Carraroe, Spiddal and Baile Na hAbhainn.

Significant damage to six burial grounds adjacent to the coastline will cost €700,000 to repair.

The Council says the structure of some of these has been compromised and in some cases, new access arrangements will have to be put in place after existing roads were washed away.

Extensive works will also have to be conducted at beaches, car parks and other tourist amenities.

The Council has already had contact with the OPW, the Department of the Marine and island co-operatives, in an effort to progress repair work.

Mayo County Council is meeting this afternoon to consider the aftermath of flood damage.

It is understood the cost of flood damage there could also run into millions of euro.

Officials are looking at the merits of taking action to try to prevent a recurrence of recent destruction.

A bridge washed away in the Carrowholly area, close to Westport, and there was significant coastal erosion in the area.

The stormy weather also resulted in flooding around Ballina and Belmullet.

A number of coastal roads have been blocked by rocks washed ashore.

OPW yet to apply for EU funding

A spokesperson for the Office of Public Works said Ireland has not, to date, sought funding from the €500m EU Solidarity Fund (EUSF) following the recent flooding.

Last week, Minister of State at the OPW Brian Hayes, said the amount of money allocated to protect Ireland from freak storms was insufficient. He also confirmed that the State would be seeking funding from the EUSF.

The OPW said the damage caused by the recent bad weather is still being assessed.

Any application for funding will not be made until a final cost has been put on the repairs. 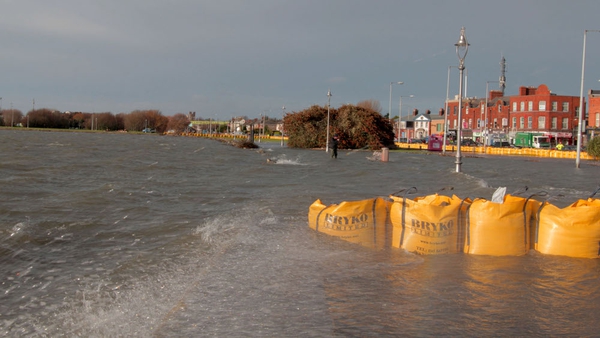