Central African Republic's president has flown into exile in Benin as a new interim team started the process of identifying leaders who might restore order after months of inter-religious violence.

Hopes that the change of leadership might provide a fresh start to peace efforts were low as gunfire rang out, mosques were attacked and Muslim-owned shops and houses were looted throughout the early part of yesterday.

The United Nations called for calm and stepped up flights out for foreigners.

Governments of other African countries have evacuated nearly 30,000 of their citizens caught up in the violence.

President Michel Djotodia and Prime Minister Nicolas Tiangaye quit on Friday under intense international pressure after they failed to halt cycles of violence that have killed thousands and driven a million people, a quarter of the country's population, from their homes.

Thousands took to the streets of capital Bangui to celebrate the departure of Mr Djotodia, who was swept to power by mainly Muslim rebels, known as Seleka, last March.

Mr Djotodia landed in Benin yesterday afternoon after Central African regional leaders asked the country to host him, according to a statement by Benin's government.

The local Red Cross said it had collected three bodies from the streets after violence yesterday.

However, by last night, the streets of Bangui were reported as being largely quiet. 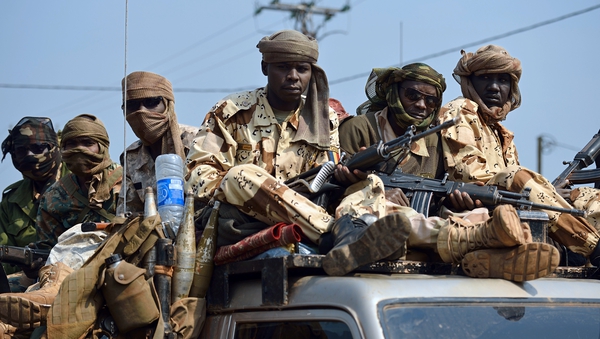 Evacuations from Central African Republic due to begin following appeals