Today was the last day for public submissions on EirGrid's proposal to build 750 electricity pylons between Leinster and Munster.

The Grid Link project potentially involves the construction of hundreds of kilometres of overhead power lines suspended by pylons stretching from Co Cork to Co Wexford.

Under the plans for Grid Link, a 250km high-voltage overhead power line would be built through counties Cork, Waterford, Wexford and Wicklow, including a network of hundreds of pylons.

EirGrid said the €500m project will ensure a high quality electricity supply for the south and east and provide a platform for job creation.

But opponents of the plans have raised concerns about the impact of hundreds of pylons on the landscape and the effect on human health, as well as questioning the necessity for the infrastructure.

The deadline for submissions on this third round of public consultation conducted by EirGrid was 5pm.

An EirGrid spokesman said the company is going through the submissions and will publish a report on the feedback it has received on its website.

It said the feedback will be used by the project team to identify what it calls "a least constrained corridor option" for the construction of the power line.

The company said it is not expecting to submit an application on the project to An Bord Pleanála until 2016. 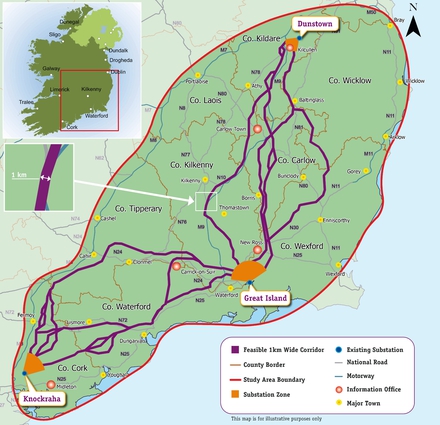 Speaking on RTÉ's Morning Ireland, Kieran Hartley, a spokesperson for the group Rethink Pylons, said it believes the project will destroy the landscape in the Comeragh Mountains in Co Waterford.

On Sunday, hundreds of anti-pylon and anti-wind turbine protesters gathered at Vinegar Hill near Enniscorthy in Co Wexford.

Speaking on the same programme, Minister for Communications, Energy and Natural Resources Pat Rabbitte said there was no question about the need to upgrade the power grid.

He said the proposal was a huge infrastructural investment project that could not be changed "at the whim of some passing fashion".

When challenged on the statement, Mr Rabbitte said he was speaking in the context of a question about a decision not being made on the project until after the next local elections.

The minister said the consultation process provided for the input of people concerned about safety and other issues.

He said it was there to assess and evaluate the submissions made.

Mr Rabbitte said the project was needed for the economic development of Ireland.

Labour MEP for Ireland South Phil Prendergast has said she believes Taoiseach Enda Kenny is using the unemployed as bait to encourage people to accept the proposals.

She was responding to comments by Mr Kenny yesterday when he suggested more young people would have to emigrate if the plan to construct the power lines did not go ahead.

Speaking on RTÉ's Today with Sean O'Rourke, Ms Prendergast said she would not be happy to have pylons placed anywhere near people's homes. 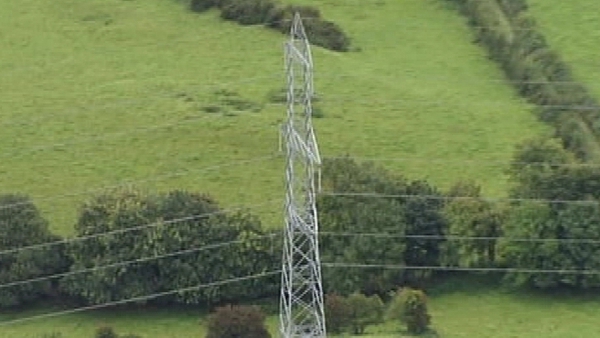