The European Commission has said it will assess any application from the Government for funding to help local authorities cope with the fallout from the recent storms.

"We stand ready to assess any application to help rebuild infrastructure or other areas in need of support if we receive a request from the Irish authorities," spokesperson Shirin Wheeler told RTÉ.

Any support would come from the European Solidarity Fund.

The Government has ten weeks to make an application, which is then assessed by the European Commission, the European Parliament and member states.

European money would, however, only go towards costs borne by public authorities, such as costs related to rescue operations and repairs to transport and energy infrastructure.

Private companies who have suffered in the storms are not eligible for support.

The European Solidarity Fund is worth €500m a year.

It was cut from €1bn as a result of the seven-year EU budget negotiations under the Irish presidency last year.

In 2009 Ireland received €13m from the fund as a result of severe flooding.

The amount of money depends on the application made, including the impact of the flooding on a member state's GDP.

Germany and Austria both made applications to the fund following severe weather in November.

It is understood the application will be granted shortly.

Earlier, Minister of State Brian Hayes said local authorities have been asked to supply initial assessments of the cost of storm damage to the Government ahead of next week's Cabinet meeting.

He was speaking as he arrived for a meeting of the National Coordinating Group for Severe Weather, the Government’s inter-agency committee charged with responding to events such as the recent storms.

Mr Hayes said Taoiseach Enda Kenny will brief the Cabinet on the scale of the damage next week and the Government is committed to putting resources in place to repair a lot of the damage that has occurred.

The minister said it was not too late to hold the meeting as the committee had put together a simulation of what would happen during such a storm last November and it is right they now assess the response of recent weeks.

He repeated that additional funds will have to be found to deal with the crisis in addition to the significant funds already in place.

Humanitarian aid is available through the Department of Social Protection to anyone who has been left in need of immediate assistance, he added.

Met Éireann has lifted a yellow wind alert that had been put in place for southern and western coastal counties.

Communities along the west coast are still counting the cost of the winter storms.

Council crews are working to assess the extent of the damage to roads, footpaths, car parks and other public amenities.

It will take millions of euro to repair the affected infrastructure.

Teams of workers from Galway City Council spent the morning examining the impact of the stormy weather in coastal areas.

At Silver Strand beach, there was extensive erosion and damage to the adjoining car park.

Efforts are ongoing to clear debris that was washed ashore and to reopen the approach road to the popular amenity.

In Co Cork, the storm is said to have caused catastrophic damage to many isolated areas along the coastline and on some islands.

County councillors have said an application for national emergency funding should be made by Cork County Council as a matter of urgency.

Fine Gael Councillor John O'Sullivan said many isolated homes have been cut off, and some businesses are under threat because of damage to access routes.

There has also been extensive damage to piers and coastal works both on the mainland and on Cape Clear and Sherkin islands.

Mr O'Sullivan said there is also serious concern about the economic impact of the storm damage on the tourist industry in west Cork.

Met Éireann said the stormy weather should continue to abate as the week progresses.

The withdrawal of the wind alert follows more than two weeks of high winds, heavy rain and flooding in many parts of the country.

The bad weather, which began before Christmas, has caused several power outages and severe structural damage in coastal areas.

Widespread gales with gusts of up to 109km/h affected many areas across the country overnight.

Irish Ferries has cancelled all of its Swift sailings today between Dublin and Holyhead.

Met Éireann has forecast some more heavy showers for today, but there will be some sunny spells in places. 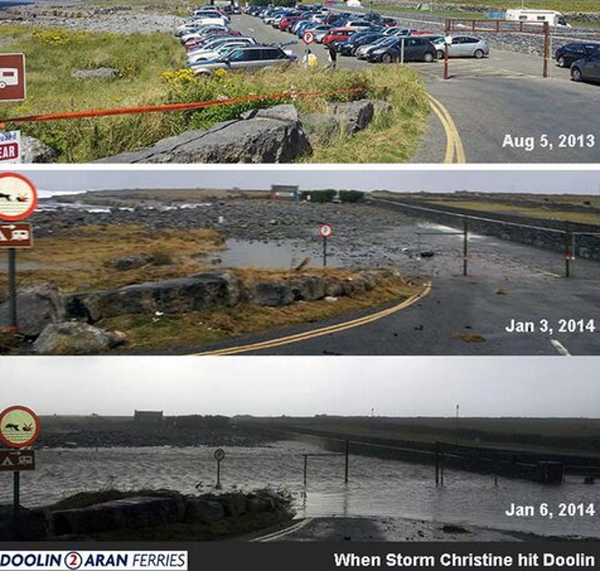