Taoiseach Enda Kenny continued his visit to the Gulf today with a series of business and political meetings in Doha, the capital of Qatar.

Mr Kenny is leading a 100-strong trade mission to the region, which is to conclude on Thursday night.

The country was controversially chosen to host the 2022 World Cup, and there is a large amount of infrastructural development taking place as a result.

Minister for Jobs, Enterprise and Innovation Richard Bruton met the Qatari ministers for finance and industry and commerce last night.

It was agreed that a Qatari delegation will come to Ireland in June to look at investment opportunities.

The Taoiseach concluded his visit to Riyadh in Saudi Arabia yesterday evening.

After a visit to the Crown Prince of Saudi Arabia, Prince Salman, Mr Kenny said Ireland would work with Saudi Arabia in terms of human rights.

He said he congratulated the crown prince on Saudi Arabia's election to the UN Human Rights Council.

Mr Kenny also praised what he called "their leadership in terms of moderation ... in the Gulf region". 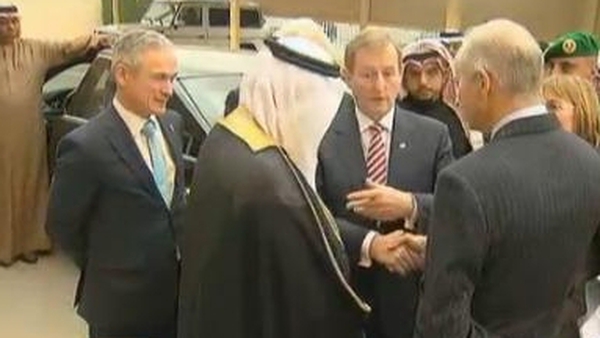