The Irish Government is to dispatch 40 tonnes of emergency supplies to South Sudan where fighting is continuing.

Aid agencies say tens of thousands of people forced from their homes by the continuing unrest in South Sudan, are in desperate need of assistance.

Minister of State Joe Costello said the supplies will be distributed by aid agency Concern to meet the immediate needs of those affected, and will be dispatched in the coming days.

Concern chief executive Dominic McSorley told RTÉ's Morning Ireland that violence had to end for the humanitarian situation to improve.

At least 1,000 people are reported to have been killed in fighting, that began last month between forces loyal to the president and rebels supporting his former deputy.

Both sides have sent delegations to attend talks getting under way in Ethiopia but fighting is continuing.

South Sudan's army said it was advancing on two rebel-controlled towns ahead of the talks.

South Sudanese President Salva Kiir declared a state of emergency in Unity state and Jonglei yesterday, whose respective provincial capitals of Bentiu and Bor are in the hands of militia loyal to former vice president Riek Machar.

A rebel spokesman in Unity dismissed the army’s (SPLA) comments on its advance as lies and said it and the national government in the capital Juba had resorted to a "war of allegations" before peace negotiations could get under way.

International pressure for a peace deal is mounting.

Neighbouring countries mediating between the two warring sides have warned that continued fighting could scupper talks.

"We are advancing to Bor because these people want to come to Juba," SPLA Chief of Staff James Hoth Mai told reporters in the capital.

"We don't yet have a ceasefire and we don't want them to come and get us."

SPLA troops are also approaching Bentiu after seizing the nearby town of Mayom yesterday.

A rebel spokesmanin Bentiu said Mayom remained in rebel hands, a comment backed up by a spokesman for the United Nations mission in South Sudan.

"As of early morning, our understanding was that Mayom was in the hands of troops belonging to Division 4 of the SPLA who have defected to Machar," the UN's Joe Contreras said.

The clashes erupted on 15 December and quickly spread to half of the country's ten states, unsettling oil markets and raising fears of the conflict destabilising an already fragile region.

Mr Kiir has accused his long-term political rival Mr Machar, whom he sacked in July, of starting the fighting in a bid to seize power.

The conflict has split the country along ethnic lines, between Mr Kiir's Dinkas and Mr Machar's Nuer group.

Mr Machar denies Mr Kiir's charge but he has taken to the bush and has acknowledged leading soldiers battling the government.

Mediators say the talks in Ethiopia's capital Addis Ababa are meant to focus on how to roll out and monitor a ceasefire.

Rebel negotiators are already in Addis Ababa. An Ethiopian official said only half of the government's delegation was present, with the remainder due in the city later today.

UN Special Representative for South Sudan Hilde Johnson has called for an end to the fighting in the country.

Ms Johnson also called for peace talks in Ethiopia to be given a chance to succeed.

She said: "We have seen terrible acts of violence in the past two weeks. There has been killings and brutality, grave human rights violations and atrocities committed.

"We have seen evidence of apparent ethnic or targeting of South Sudanese citizens on ethnic grounds.

"This can lead to a perpetual cycle of violence that can destroy the fabric of the new nation.

"We need to do everything possible to prevent such a cycle of violence between communities of South Sudan." 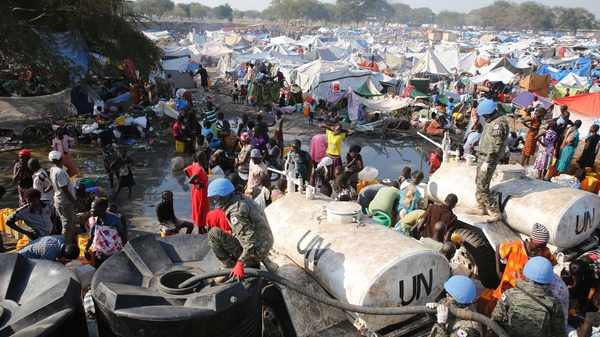