Motorists are being advised to exercise caution amid the Christmas travel rush, as Met Éireann has issued an Orange wind warning for this evening and tonight.

Winds of up to 130km/h are forecast, with the strongest winds expected in western and northern coastal counties.

The Road Safety Authority has issued an appeal for motorists to slow down.

It has advised all road users to check local weather and traffic reports before planning a journey.

AA Roadwatch has advised motorists to slow down, take extreme care and watch out for debris.

Meanwhile, Irish Ferries has cancelled a number of its Jonathan Swift Fast Ferry sailings between Dublin and Holyhead this evening and tomorrow due to adverse conditions on the Irish Sea.

The 8.15am sailing from Dublin to Holyhead tomorrow and the 11.50am from Holyhead to Dublin have been cancelled.

Passengers will be accommodated on cruise services.

P&O Ferries has said sailings between Larne and Cairnryan have been suspended and are unlikely to resume until tomorrow afternoon based on current forecasts.

Met Éireann is forecasting that the situation will deteriorate further.

Iarnród Éireann has said it expects up to 400,000 Intercity journeys to be made across the network over the Christmas and New Year holiday period.

The company is advising customers to book online at www.irishrail.ie if possible, and to allow extra time at stations in major cities.

A full schedule information for the christmas period is available on the company's website.

The ESB has said it has plans in place to deal with any power outages caused by stormy weather over Christmas.

Two people were killed and travel plans were disrupted on one of the busiest travel days of the year in the UK when hurricane-force winds and torrential rains caused flooding and power cuts.

Winds of up to 135kms per hour were recorded with heavy downpours causing rivers to flood, traffic bottlenecks, and rail, flight and ferry services to be cancelled. 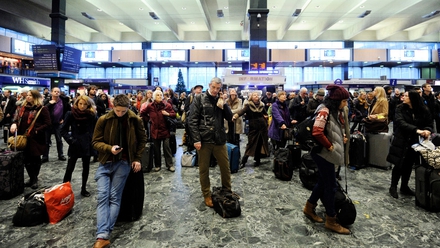 Police said a 48-year-old man drowned in the Rothay River near Ambleside, Cumbria after falling into the river trying to save his dog, which survived.

A woman's body was found in a river in Bethesda, Gwynedd, in North Wales on the edge of Snowdonia national park after she apparently fell in, police said.

Up to 5,000 homes in the southwest were left without power after overhead electricity lines were damaged but services were quickly restored.

Airports were also disrupted with some flights from London's Heathrow Airport cancelled and Southampton and Bristol Airports forced to cancel flights due to the high winds.

The disruption was expected to continue tomorrow with railway services warning passengers to expect delays and some cancellations. 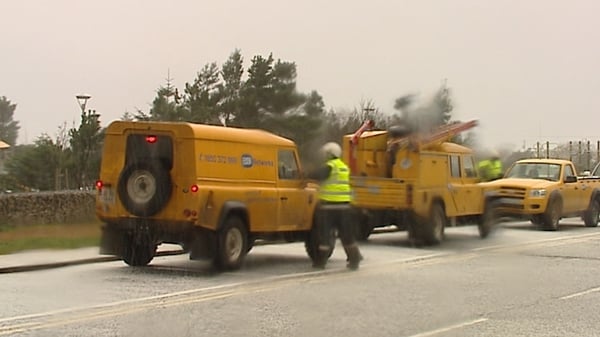