Tánaiste Eamon Gilmore has said he is "not in a position to comment" on reports from Moscow that Russia is going to organise the placement of billions of euro of bonds on the Irish Stock Exchange to assist Ukraine.

Mr Gilmore was speaking in Brussels, where he was attending a meeting of European Union centre-left political leaders.

However, he said, it would be a "great mistake" if the Ukraine's relationship with the EU and Russia was seen as an "either or option".

Mr Gilmore declined to state if he believed it would be a diplomatic error for Russia to use the Irish Stock Exchange to raise money for Ukraine, at a time when Russia and the EU were at loggerheads.

Russian President Vladimir Putin has portrayed Russia's bailout of Ukraine as an act of brotherly love to stave off economic crisis.

He said it was not designed to stop its neighbour moving closer to Europe.

Russia agreed on Tuesday to buy $15bn (€11bn) worth of Ukrainian Eurobonds and cut the price Ukraine pays for Russian gas.

The announcement came weeks after the Ukrainian government spurned a trade pact with the European Union in a policy U-turn that sparked anti-government protests.

At a packed annual news conference, Mr Putin brushed aside suggestions that he agreed to the bailout for geopolitical reasons and that it was a gamble at a time when Russia's own economy is fragile.

"Now we see that Ukraine is in difficult straits ... if we really say that they are a brotherly nation and people then we must act like close relatives and help this nation," Mr Putin said.

"In no way is this connected with the Maidan [protests in central Kiev] or the European talks with Ukraine."

Mr Putin acknowledged that Ukraine's credit rating was not high, but said Russia believed in the competitiveness of its fellow former Soviet republic's industry.

He reiterated that the decision to reduce the gas price was a temporary move, but he hoped to "agree on long-term cooperation" in the energy sector.

Mr Putin did not respond directly to a question about his failure to persuade Ukraine to join a customs union with Russia, Kazakhstan and Belarus, which he hopes to build into a larger trading and political bloc.

Ukrainian President Viktor Yanukovych said he had to accept the aid package from Russia because of high gas prices and debt repayments to the International Monetary Fund.

However, he said the package did not contradict a policy of integration with Europe.

"There are no contradictions in the course of Ukraine for any [European] integration," he said.

He added that Ukraine should maintain good economic relations with all its strategic partners, including the EU and Russia.

Meanwhile, Mr Putin is to pardon one of his best known opponents, oil tycoon Mikhail Khodorkovsky, after a decade in jail.

Mr Putin made the surprise announcement that he would soon free Khodorkovsky, once Russia's richest man, after a marathon news conference in which he exuded confidence that he has reasserted his authority in the face of street protests.

He said two members of the Pussy Riot protest group would also be freed.

However, it was the about-turn on Khodorkovsky, who was due for release next August, that grabbed most attention.

Khodorkovsky, 50, fell out spectacularly with Mr Putin a decade ago.

His company, Yukos, was broken up and sold off, mainly into state hands.

It followed his 2003 arrest at gunpoint on an airport runway in Siberia on fraud and tax evasion charges.

He became a symbol of what investors say is the Kremlin's abuse of the courts for political ends.

The Kremlin denies this but Mr Putin has singled Khodorkovsky out for bitter personal attacks and ignored many calls for his release.

However, he said: "He has been in jail already more than ten years. This is a serious punishment."

Saying Khodorkovsky's mother was ill and that he had asked for clemency, Mr Putin added: "I decided that with these circumstance sin mind ... a decree pardoning him will be signed." 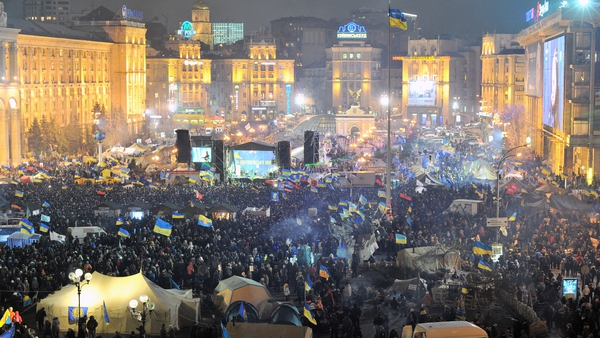 Yanukovych facing calls to resign over bailout from Russia