Taoiseach Enda Kenny has described his visit, alongside the British Prime Minister David Cameron, to a series of Irish and British World War I memorials in Flanders as "poignant and powerful".

During a carefully balanced schedule, the two prime ministers spent three hours visiting the most solemn and symbolically important World War I sites, with both men acknowledging the sacrifice of the war dead from the other's country.

Mr Kenny became the first ever Taoiseach to lay a wreath at a British and Commonwealth cemetery.

Mr Cameron bowed his head at the grave of Willie Redmond, the Irish nationalist MP who was killed on the Western Front in 1917.

Mr Redmond had specifically requested to be buried apart from British war graves as a protest against the execution of the 1916 Easter Rising leaders.

Arriving at this evening's EU summit in Brussels following the event, the Taoiseach reflected: "The thought crossed my mind standing at the grave of Willie Redmond that that was why we have a European Union and why I'm attending a European Council.

"It's very striking when you stand there and look at the names of your own country people who fought in what was supposed to be the war to end all wars, and the senseless slaughter that occurred, and to visit the graveyards and see the names.

"It is very poignant and very powerful.

"I think it was the first time that an Irish Taoiseach actually had the opportunity to pay tribute to British soldiers and Irish soldiers who fought in World War I. So for me, personally, this was something very important."

In the visitors' book next to Redmond's grave, Mr Cameron wrote: "It is an honour to visit with the Irish PM to commemorate all those who gave their lives in the cause of freedom, including this historic site." 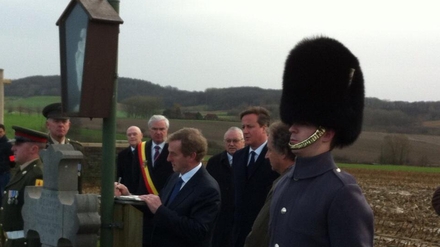 The visit began at the Island of Ireland Peace Park in Messines and was attended by joint British-Irish military honours personnel.

The park was inaugurated in 1998 by Queen Elizabeth and former president Mary McAleese, a move seen as a symbolic high point in the period of reconciliation coinciding with the signing of the Good Friday Agreement.

It commemorates the 50,000 Irish men, from north and south, who died in the slaughter, and in particular, the comradeship of northern loyalists from the 36th Ulster Division and the southern nationalists of the 16th Irish Division during the assault on Messines Ridge in 1917.

The Taoiseach and Mr Cameron both laid a wreath at the site and observed a minute's silence.

It was preceded by a rendition of the Piper's Lament performed by pipers Sgt Kevin Duncan and Corp Anthony Kelly from the Army School of Music.

Following the visit to Redmond's next to the village of Loker, the two men travelled to the Menin Gate in Ypres, which commemorates 185,000 British and Commonwealth war dead, including 100,000 men whose bodies were never recovered.

Mr Cameron read out For The Fallen, by war poet Robert Laurence Binyon, before both men laid a wreath at the gate.

Later, Mr Cameron told a group of visiting British school children that he had come across five members of his extended family listed among the names at Menin Gate.

The visit ended at Tyne Cot cemetery, the largest British and Commonwealth war cemetery, which contains the graves of 12,000 service men who died in World War I.