A 23-year-old woman has died after a tree fell on her car near Mullingar in Co Westmeath this afternoon.

The incident happened at Grange South as the woman was driving into Mullingar from the Ballymahon direction at around 4pm.

The woman was trapped in the car after the tree fell on it in high winds.

The emergency services freed her from the vehicle and she was brought to the Midland Regional Hospital in Mullingar.

However, she died there from her injuries this evening.

Fire services have removed the tree and the road has re-opened.

The death came after Met Éireann issued a severe weather warning for high winds and rain across many parts of the country.

Elsewhere, the high winds caused damage at Kent train station in Cork where a canopy over two of its platforms was blown off.

Three people were injured in the incident. One person was taken to hospital, while two others were treated at the scene.

The canopy landed on cars in an adjoining car park and a number of cars have been damaged.

Iarnród Éireann said the station has been partially reopened and full services are expected to operate tomorrow morning.

The canopy came down on a train, which was not in service at the time.

Cork to Cobh/Midleton services were suspended, while Dublin to Cork services operated between Dublin and Mallow only.

A limited bus service was in operation from Kent Station to Cobh and all rail tickets were honoured on scheduled Midleton services.

The company said that although there were high winds and rain at the time of the collapse, the cause is not yet known and will be the subject of a full investigation.

ESB Networks has said around 12,000 homes are still without power, mainly in the north of the country, with Donegal the worst affected county.

It said it has restored power to 13,000 homes so far, but many will be without power overnight as crews struggle to repair faults in the strong winds.

The promenade in Salthill, Co Galway was closed to traffic for a time this evening after high tides caused flooding in the area close to Blackrock. 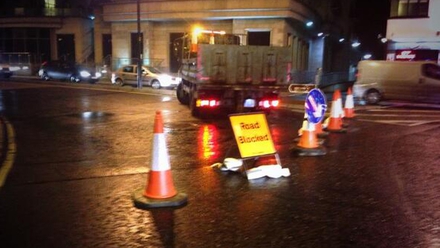 Two car parks in the area were also been hit by flood waters and a number of cars were submerged in water.

Galway City Council staff said some vehicles parked beside the promenade were washed across the road when tides peaked earlier this evening.

Flooding has also been reported in some areas of Dublin, while the storm ripped the roof off an unoccupied house in Kilmallock, Co Limerick.

The Irish Coast Guard has issued warnings as parts of the country will be battered by storms and gusts of up to 150km/h.

Severe wind is expected in counties Donegal, Galway, Leitrim, Mayo and Sligo, where a status red warning has been issued.

Status red is the highest alert that can be issued.

Severe southwest winds are due to reach 120km/h in Clare and Cavan and will be strongest in exposed areas.

It will also be very windy across the country generally with strong and blustery south veering southwest winds and gusts of 90 to 100km/h forecast.

The expected winds caused management at the Cliffs of Moher visitor centre in Co Clare to close the tourist attraction to the public.

The Irish Coast Guard is also strongly advising people not to go out on exposed coasts, cliffs or piers as huge waves can be whipped up by high seas, posing hazards to anyone close to the shoreline.

It urged vigilance over the festive period where people engaged in outdoor activities may not be familiar with the dangers of inclement weather.

An 80km/h speed limit was imposed on rail lines in the west and northwest.

Elsewhere, the Environment Agency in the UK has issued 22 flood warnings for parts of England and Wales.