Former South African President Nelson Mandela has been laid to rest in his ancestral home of Qunu in the Eastern Cape.

The funeral was attended by around 4,500 guests and dignitaries, including Sinn Féin's Gerry Adams.

A private burial service for family and friends took place after the state funeral.

As his coffin was lowered into the wreath-ringed grave,three military helicopters flew low over the cemetery dangling the South African flag on weighted cables, a poignant echo of Mr Mandela's inauguration as South Africa's first black president nearly two decades ago.

A battery of cannon fired a 21-gun salute, sending booms reverberating around the rolling hills of the Eastern Cape,before five fighter jets flying low and in formation roared over the valley.

"Yours was truly a long walk to freedom, and now you have achieved the ultimate freedom in the bosom of your maker," a presiding military chaplain said at the family grave site, where three of his children are buried.

"The person who is lying here is South Africa's greatest son," Cyril Ramaphosa, deputy leader of South Africa's ruling ANC party who was acting as one of the masters of ceremonies, said as the service got under way.

Ahmed Kathrada, who served in prison alongside Mr Mandela, paid a poignant tribute to the first democratically-elected South African president.

He said his friend was now with the rest of what he called the ‘ANC A team’, before listing out a number of people involved in the struggle.

Mr Kathrada said last time they met, Madiba was a man helpless and reduced to a shadow of himself.

"Today, mingled with our grief, is the enormous pride that one of our own has during his lifetime and now in your death united the people of South Africa and the entire world on a scale never before experienced in history."

"And now I have lost a brother. My life is in a void and I don't know who to turn to," he finished.

Mr Zuma described Mr Mandela as a fountain of wisdom and beacon of hope, before urging South Africans to rise above anger.

"It is the end of 95 glorious years of a freedom fighter, a dedicated and humble servant of the people of South Africa," Mr Zuma said in his eulogy at the funeral ceremony.

"Whilst the long walk to freedom has ended in the physical sense, our own journey continues. We have to continue building the type of society you worked tirelessly to construct. We have to take the legacy forward," he said.

In the Xhosa language, Mr Mandela's granddaughter Nandi Mandela said: "Go well Madiba. Go well to the land of our ancestors, you have run your race."

She added: "We will carry lessons you taught us throughout our lives.

"As South Africans we must stop pointing fingers, but must rather lead by example, as you did."

Chief Ngangomhlaba Matanzima, a representative of Mr Mandela's family, said: "A great tree has fallen, he is now going home to rest with his forefathers. We thank them for lending us such an icon."

Fellow anti-apartheid veteran Archbishop Desmond Tutu was among those arriving shortly after dawn at a vast, domed tent erected in a field near Mr Mandela's home, having resolved a mix-up over his invitation.

Mr Mandela died on 5 December aged 95, plunging his 53 million countrymen and millions more around the world into grief, and triggering more than a week of official memorials to the nation's first black president.

As many as 100,000 people paid their respects in person to his lying in state at the Union Buildings in Pretoria, where he was inaugurated as president in 1994, an event that brought the curtain down on more than three centuries of white domination.

When his body arrived yesterday at his ancestral home in Qunu, 700km south of Johannesburg, it was greeted by ululating locals overjoyed that Madiba, the clan name by which he was affectionately known, had "come home".

Mr Mandela served just one term as leader of Africa's biggest and most sophisticated economy, and formally withdrew from public life in 2004, famously telling reporters at the end of a farewell news conference: "Don't call me, I'll call you."

His last appearance in public was at the 2010 World Cup final in Johannesburg's Soccer City stadium, waving to fans from the back of a golf cart.

Yet such was his influence as the architect two decades ago of the historic reconciliation between blacks and whites that his passing has left a gaping hole in the heart of South Africa.

With an eye on elections in five months, the ruling African National Congress (ANC), the 101-year-old former liberation movement Mr Mandela once led, has seized on his death as a chance to shore up popularity that is ebbing even in its black support base.

The strategy has not been without its risks, not least because it has highlighted the gulf in stature between South Africa's first black president and its fourth, the scandal-plagued Jacob Zuma. 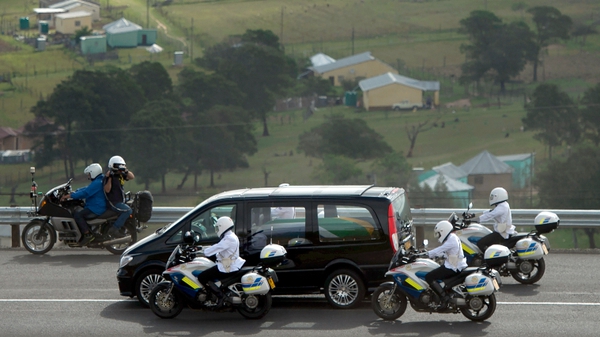 Body of Nelson Mandela arrives at his ancestral home of Qunu