He said he suffered a schizophrenic episode during the event.

The interpreter, Thamsanqa Jantjie,34, told a South Africa TV channel he had faced a very difficult situation and was placed in life-threatening danger.

He said: "I was faced with a very, very difficult situation under my medical condition."

"My life was on danger because you know it was the security, it was very tight and then I have come to a point where I feel that now I am sick": said Mr Jantjie.

Earlier, in the day Mr Jantjie told a newspaper that he had started hearing voices and hallucinating while on stage.

He said this caused him to make gestures that made no sense to outraged deaf people around the world.

But Mr Jantjie maintains he is proud of his performance at the memorial.

He added: "I am proud of myself that there was no mistake that happened there, and I thank God that I am only being questioned, now that I was interpreting wrong.

Mr Jantjie said: "if there was any interpreter that could interpret right, why was he not there? Why it was me, in all these events that I have been interpreting."

The publicity surrounding Mr Jantjie's unconventional gestures - experts said he did not know even basic signs such as thank you or Mandela.

A frenetic hunt for him and his employers was sparked.

Attempts by Reuters to track down the company were unsuccessful. Bogopane-Zulu said its management had fled the glare of publicity, with the suggestion that it had been providing sub-standard interpreters for some time.

It's no longer the question of the government, it's a question of how do we champion this problem of disability in South Africa?

Will you live with a grant only? I've got kids I've got family, they might say I am mad, but I am a man, I am provider, I am neighbour, I am a friend, then you can call me fake, after that, said Mr Jantjie during interview with ETV.

The South African government admitted Mr Jantjie was not a professional interpreter but played down security concerns at his sharing the podium with world leaders including US President Barack Obama at the memorial last Tuesday.

After the memorial, South Africa's leading deaf association denounced him as a fake, making up gestures to be put into the mouths of Obama and his South African counterpart Jacob Zuma.

Besides the security issues, the controversy has cast a shadow over South Africa's 10-day farewell to its first black president, who died a week ago aged 95.

It also heaps more pressure on Zuma, who is fighting a slew of corruption allegations against him and his administration and who was booed by the crowd on Tuesday.

Footage from two large African National Congress (ANC) events last year shows Mr Jantjie signing on stage next to Zuma, although the ruling party said it had no idea who he was. 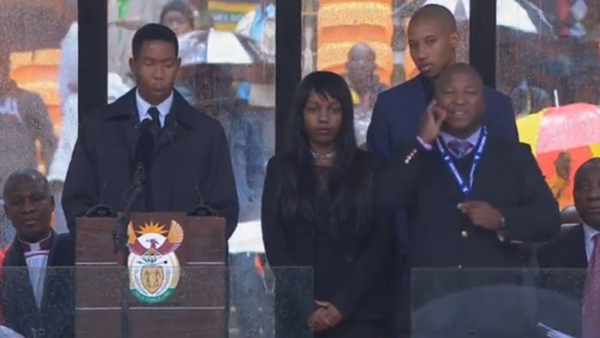