Former Labour Party TD Colm Keaveney has said it is a great honour for him to have joined Fianna Fáil.

He said the party has learned from mistakes of the past.

Mr Keaveney was introduced to Fianna Fáil TDs and Senators at a meeting this afternoon.

Fianna Fáil leader Micheál Martin said he warmly welcomed Mr Keaveney to the party and said he would add value to it.

Mr Keaveney lost the Labour whip in 2012 when he voted against Budget cuts.

He retained his post as chair of the party, arguing he had a mandate from the membership, but stood down earlier this year.

He has represented Galway East since the last general election but following boundary revisions, his seat is regarded as one of the most at risk.

Mr Kitt said he was very surprised when he heard that Mr Keaveney was joining the party.

He added that there were mixed feelings around the constituency about the move. He said some members were disappointed but others felt Fianna Fáil had to broaden its support base to ensure renewal.

Mr Kitt said the decision would not affect his plans regarding the next general election and that everyone would have to "fight their own corner".

Fianna Fáil TD Niall Collins said anyone was entitled to join the party and he felt positive about Mr Keavney's decision.

Speaking on RTÉ's News at One, he said: "We are renewing ourselves right throughout the organisation, up and down the country, and also on a policy level.

"And at the centre of all our polices we have been articulating is the principle of equity and fairness, and I think they are core principles that Colm Keaveney espouses and identifies with.

The second half of the tweet translates to "Fortune favours the brave".

Minister for Education Ruairi Quinn said the move was a personal decision but said he was sad that Mr Keaveney had left the Labour Party, and sad that he had now decided to take this route.

Mr Quinn said there had been "a way back" for Mr Keaveney, but said he chose not to take it.

Fianna Fáil Councillor for Tuam, Michael Connolly said he was "amazed" that the former Labour TD now subscribed to his party's ethos, philosophy and ideology.

There had been speculation he might contest next year's European elections as an independent. 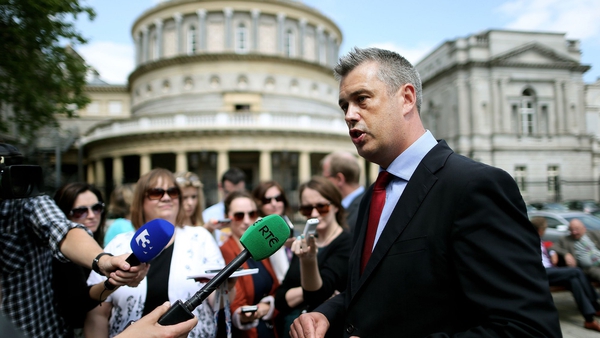