An Aer Lingus flight has left Dublin Airport this morning with 40 tonnes of humanitarian aid bound for the Philippines.

The Irish aid agency GOAL is sending medical supplies, food and materials to provide shelter for survivors of Typhoon Haiyan as well as nine tonnes of water.

Aer Lingus has provided an A330 aircraft and staff to fly the cargo to Dubai, before onward transportation by GOAL staff to the Philippines.

More than 5,000 people died when a violent storm struck the Philippines two weeks ago.

Around 11 million people have been affected, with 500,000 left homeless by the disaster.

GOAL chief executive Barry Andrews says the aid will help to shelter victims in Panay in the west of the country.

"Once again, the people of Ireland have been extraordinarily generous... I would also like to sincerely thank everyone at Aer Lingus for arranging and putting on this flight, and for the cockpit, cabin crew and operations staff employees, who volunteered their free time," Mr Andrews said.

Mr Andrews said companies and organisations from across Ireland had contributed, including the Defence Forces, which had donated materials worth €60,000.

Aer Lingus also helped deliver emergency supplies to survivors of the earthquake in Haiti in January 2010.

The airline has been collecting on-board donations for the Philippines over the past week. 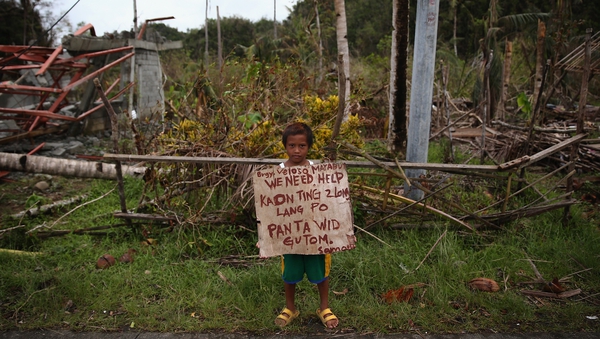