Thousands of demonstrators rallied in the Ukrainian capital and clashed with police last night, angered by a government decision to drop a landmark deal with the European Union in favour of closer ties with Russia.

The protests evoked memories of the Orange Revolution but with fewer than the tens of thousands who massed nine years ago.

Opposition groups are hoping for a much larger turn-out at a rally they have called for tomorrow.

The country of 46 million people is heavily indebted and must find more than $17bn to pay gas bills to Russia and debt repayments including $3.7bn to the International Monetary Fund.

President Viktor Yanukovych had been due to sign the agreement with the EU in Vilnius on Friday but backed off after pressure from Russia - Ukraine's biggest trading partner and main source of gas.

No details have yet emerged of what deal he struck with his Russian counterpart Vladimir Putin, who is savouring a significant diplomatic triumph over the EU.

But it seemed certain that the deal involved economic benefits, including a cheaper price for gas, which Kiev has been seeking for four years, and possibly loans.

The opposition - which has been accusing President Yanukovych for weeks of preparing to pull out of the deal with the EU - saw his motivation as self-enrichment and his determination to secure a second term in power in 2015.

Opposition party leader and boxing champion Vitaly Klitschko said ordinary Ukrainians - not just politicians - needed to show their displeasure at the decision and called on people to take to the streets.

"I can't do anything myself. It doesn't matter how strong I am. But if I don't have your support, nothing will change," he said.

"Our main task is to get united because we are united by the desire to live in a better country. What do we have to do? Every one of us has to bring 20, 40, 100 people here. And then, if there are a lot of us, we can go and demand. And think what if a million people take a stand?"

His call echoed another from prison by jailed Ukrainian opposition icon and former prime minister Yulia Tymoshenko for people to take to the streets. 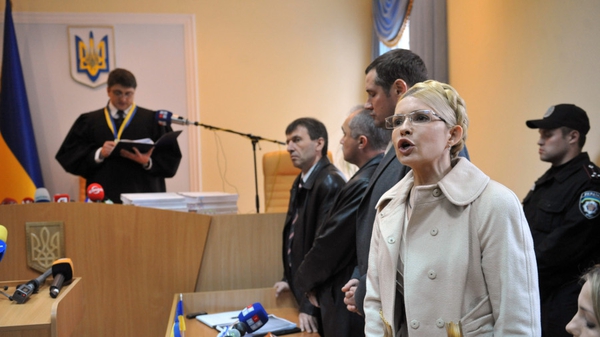