Leaders of the Commonwealth of mostly former British colonies have gathered in Colombo for a biennial summit.

The summit has brought with it intense scrutiny of Sri Lanka's human rights record four years after the civil war ended.

President Mahinda Rajapaksa had hoped the meeting, which two heads of state boycotted, would prove an advertisement for progress in the island state of 21 million.

Instead the build-up to the summit has been overshadowed by allegations of state-sponsored rape and torture.

"I will be clear with the Sri Lankan President Rajapaksa: it's time the appalling and chilling events in his country are investigated," Mr Cameron wrote on Twitter.

Opening the summit, President Rajapaksa defended the government's record, after saying this week it had "nothing to hide".

"We in Sri Lanka are stepping into a new era of peace, stability and premium economic opportunities," he told heads of state and officials from 49 countries.

"In ending terrorism in 2009 we asserted the greatest human right, the right to live."

Separatist Tamil rebels battled government forces for 26 years until an army offensive crushed them in 2009.

A UN panel has said around 40,000 mainly Tamil civilians died in the final months of the offensive.

Both sides committed atrocities but army shelling killed most victims, it concluded.

The United Nations wants an international inquiry into allegations of war crimes in the final months of the conflict.

The Commonwealth, comprising 53 countries, has little power, but wields some influence in mediating disputes between members.

Officials in Colombo have expressed frustration at what they see as interference from abroad in the run-up to the Commonwealth meeting.

They have said that the country is on a path to reconciliation, aided by strong economic growth.

It says they are part of a campaign by rebel sympathisers to tarnish its image and detract from the summit.

But some observers warn that the repressive climate in the north, where the Tamil minority is concentrated, and slow progress on demands for greater autonomy risk stoking fresh violence.

Mr Cameron plans to visit the Tamil-dominated northern city of Jaffna to push his case for greater rights there.

On a stopover in India yesterday, Mr Cameron said that, while determined to deliver a "tough message", there had been progress in terms of political rights in the north and reconciliation with minority groups.

Prime Minister Manmohan Singh of India, whose population of 1.2 billion dwarfs the rest of the Commonwealth combined, also did not travel to Colombo.

This was partly due to domestic pressures. His foreign minister is taking part instead. 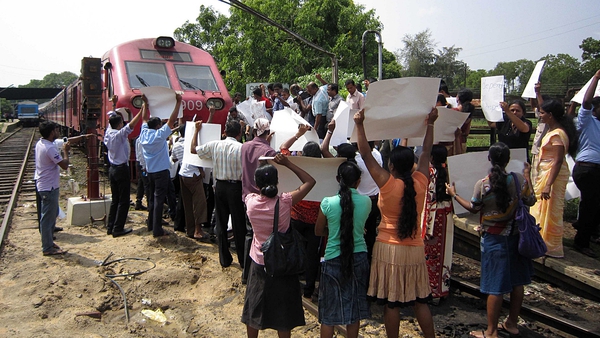