Allegations ethnic minority Tamils in Sri Lanka are being subjected to abuses four years after the army won a civil war have put pressure on the government as it prepares to host a Commonwealth summit.

Canadian Prime Minister Stephen Harper is skipping the meeting because of concern about a deterioration in human rights and his Indian counterpart, Manmohan Singh, has also pulled out.

British Prime Minister David Cameron has said he will ask "serious questions" and demand an investigation into allegations of war crimes.

Separatist rebels from the minority Tamil community battled government forces for 26 years, beginning in 1983, until they were finally crushed in a major army offensive in 2009.

A UN panel concluded that thousands of civilians, most of them Tamils, died in the final offensive.

It concluded that atrocities were committed by both sides, but that most of the victims were killed by army shelling.

The government says Sri Lanka is on the path to reconciliation, helped by fast economic growth.

But complaints of rights abuses, such as those recently aired in a forum organised by Human Rights Watch, have raised concern about the peace.

Two ethnic Tamils, speaking from Britain where they are seeking asylum, told reporters last month they had been detained by security forces, repeatedly raped and beaten in what rights groups say is a pattern of intimidation.

One of them said he was stopped on the street and pushed into a van last year. During five days in detention, a group of men beat him with a plastic pipe and repeatedly inserted a metal rod into his rectum, he said.

"I had no choice, I couldn't stand the torture so I admitted to the allegation I was in the LTTE," the man said, referring to the now disbanded Liberation Tigers of Tamil Elam (LTTE) rebels.

A 30-year-old woman said in the conference call she was pushed into a van last August and raped in detention for 19 days by different men.

"While in detention I could hear other women screaming in other rooms," she said. Both said they were released after friends and relatives paid a ransom.

Human Rights Watch investigator Charu Lata Hogg said evidence of rape had been detected by doctors, but rarely included in asylum applications because of stigma. She said she had documented 75 cases.

Sri Lankan President Mahinda Rajapaksa's government dismisses such accusations which it says amount to a campaign by rebel sympathisers to tarnish its image and detract from the November 15-17 Commonwealth meeting.

The 53-member Commonwealth, made up mostly of former British colonies, holds a head of government meeting every two years. It has little decision-making power, but has some influence in mediating disputes between members.

"If they were really victims, they should have gone to a police station and made a complaint," he said of those who complained of abuse, adding that 15 cases of torture were before courts.

The government also rejects the findings of the UN panel of heavy civilian casualties at the end of the war, as well as two resolutions by the UN Human Rights Commission calling on authorities to investigate alleged war crimes.

Former war zones still have a heavy military presence that leads to abuse, said MA Sumanthiran, a human rights lawyer and member of parliament for the Tamil National Alliance (TNA) opposition party, the former political proxy of the defeated rebels.

He said that public opinion in Sri Lanka, with ethnic Sinhalese making up the majority of the population, was hostile to rehabilitated fighters. Rape victims tended to come forward only if they left the country.

"It is widespread, that's not to say there is a policy, but there is at least tolerance of such things happening," he said.

The TNA swept the region's first post-war election in September, showing that the cause of autonomy remains strong, though violence is seen as unlikely to resume. 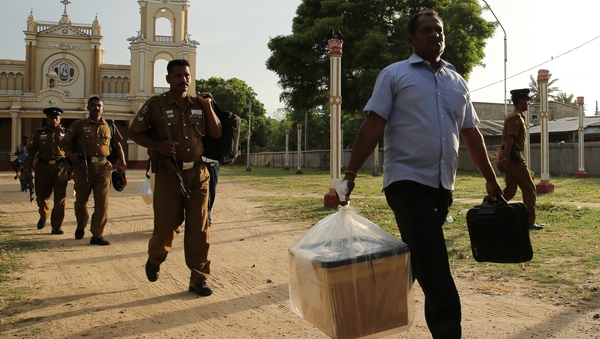