He was a founding member of the SDLP.

Mr McGrady was elected to Westminster in 1987 when he defeated the sitting MP Enoch Powell, then an Ulster Unionist.

He was a former chairman of the party, a huge supporter of the peace process and well respected by all political sides in Northern Ireland.

The former chartered accountant was one of 11 children from Downpatrick, where his father ran a clothing shop.

His wife Patricia died in 2003 and he is survived by his three children, Paula, Conaill and Jerry.

Mr Robinson said, 'I knew Eddie for many years and am deeply saddened to hear of his passing.

He also said 'while coming from a different political tradition, his warmth and personality won him many friends and a great deal of respect from within the unionist community."

SDLP leader Alasdair McDonnell said Mr McGrady was a man of integrity and faith and who had helped shape history.

Dr McDonnell added: "He helped define the politics of an era and build the peace of our lifetime."

He said during years of conflict and tension, Mr McGrady's personal dignity and measured words "embodied the values of decency, mutual respect and the primacy of democratic politics."

Tanáiste and Minister for Foreign Affairs Eamon Gilmore said Mr McGrady was one of the SDLP's "finest parliamentarians and negotiators."

He said Mr McGrady served the people of South Down tirelessly for over 50 years and "without Eddie and his party, Ireland would be a very different place. We are in their debt."

Former SDLP leader John Hume said he was extremely sad to learn of the death of his "dear friend".

He said Mr McGrady was a man of deep faith, incredible fortitude and considerable courage.

"He will be rightfully remembered for his 1987 election victory over Enoch Powell, but we should not forget his unswerving devotion to peace," he said.

Sinn Féin’s South Down MLA Caitriona Ruane said: "Eddie always treated me with kindness and respect and I would like to acknowledge his work for all the people of South Down."

Former SDLP leader Margaret Ritchie, who succeeded Mr McGrady as South Down MP, said: "Eddie was not only my mentor and colleague but a very dear friend." 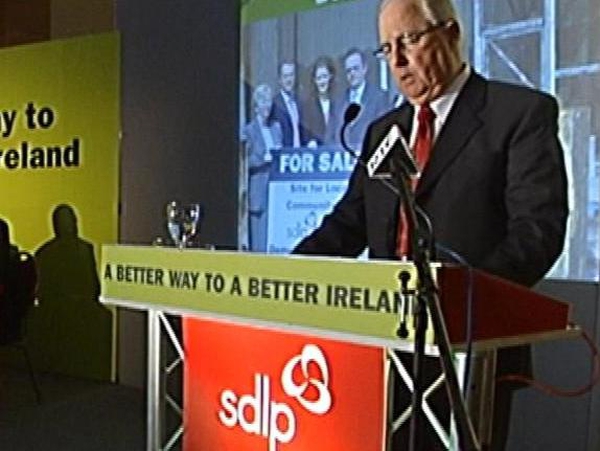 SDLP's Eddie McGrady to stand down at election News