Toronto Mayor Rob Ford has apologised for smoking crack cocaine and promised he would never make the same mistakes again.

However, he insisted he would stay in his job and run for office again next year.

Mr Ford said: "I want to be clear. I want to be crystal clear to every single person. These mistakes will never, ever, ever happen again.

"I was elected to do a job and that's exactly what I'm going to continue doing."

Earlier, Mr Ford admitted he had smoked crack cocaine, probably "in one of my drunken stupors", but insisted he was not an addict.

Speaking just days after Toronto's police chief confirmed that police have recovered a copy of a video that two media organisations have said shows the mayor smoking the drug, Mr Ford told reporters he had smoked the drug, perhaps about a year ago.

"Yes I have smoked crack cocaine," he said in his first admission of drug use after six months of evading the question.

"But, no, do I? Am I an addict? No. Have I have tried it? Probably in one of my drunken stupors, probably approximately about a year ago," he said.

Elected in 2010 on a cost-cutting platform, Mr Ford has maintained strong support from voters in his suburban base even as the scandal has escalated.

A poll taken after police chief Bill Blair confirmed the existence of the video put Mr Ford's approval rating at 44%, up five points from a previous poll.

Mr Ford repeated a plea to the police to release the video, which he told the Toronto Sun newspaper was probably "not pretty".

He also said he would not quit or take a leave of absence.

Mr Ford has already apologised for "mistakes" in his past, admitting to being "hammered" at a street festival this summer and drunk at city hall after-hours on St Patrick's Day last year.

All four big Toronto newspapers, including the right-leaning Toronto Sun, have urged him to quit.

"I don't even remember," Mr Ford said of his drug use. "After some of the stuff that you guys have seen me, the state I've been in. It's a problem."

In May, when the Toronto Star newspaper and the Gawker media blog first reported the existence of the video, Mr Ford said he does not use crack cocaine, and he could not comment on a video he has not seen.

Chief Blair said last Thursday that police had obtained a video "consistent" with the Gawker and Star accounts, recovering the video from a deleted hard drive scooped up as part of a wide-ranging drug probe.

But that video did not in itself not support charges against the mayor, he said.

Contacted after Mr Ford's admission, a police spokeswoman said: "The information will be passed on to investigators."

While the mayor’s popular support has held strong, his once rock-solid supporters at city hall have started wavering.

City councillor Denzil Minnan-Wong, a member of Mr Ford's executive committee, said he will bring a motion to the next city council meeting asking Mr Ford to take a leave of absence.

Council does not have the power to force Mr Ford out of office.

"It is very disappointing to have the mayor of the City of Toronto admit to smoking crack cocaine," he told reporters.

"I was disappointed at two levels: firstly that he did it, but secondly that it took him so long to admit it."

Another motion circulating at city hall would seek to restrict Mr Ford's ability to remove people from his executive committee and other standing committees.

Mr Ford's personal life made headlines even before he was elected mayor.

In 2006, when he was a member of city council, Mr Ford caused what the Canadian Broadcasting Corp called "a drunken ruckus" during a Toronto Maple Leafs hockey game, shouting obscenities and insults until he was ejected.

In 2008, police charged him with assault and threats to his wife, but then withdrew the charges, citing inconsistencies in her story.

Mr Ford maintained his innocence and the two later reconciled. 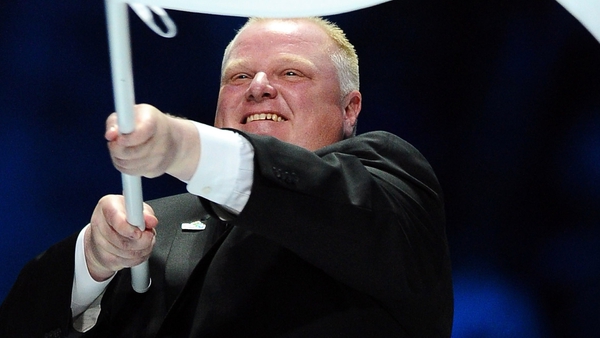