The Roma family whose daughter was taken into care in Tallaght, Dublin two days ago has said what happened to their family should never have happened.

DNA tests confirmed the seven-year-old girl who was taken from their home and placed in HSE care is their daughter.

In a statement issued through their solicitors, the family said they were "delighted" their daughter is coming home.

"Her removal has been a cause of huge upset to her parents, her brothers and sisters, and the young girl herself.

"Our clients also wish to say they do not believe that what has happened to their family over the few days should ever have happened.

"They do not accept that this was any proper or sufficient basis to take their daughter away from them."

The family said they believe there are serious questions arising about the procedures in the case and will be taking legal advice.

In a statement, gardaí said protecting vulnerable children is of paramount importance.

"An Garda Síochána want to assure the community that we take extremely seriously all reports received from members of the public concerning child welfare issues."

Members of the Roma family in Tallaght have welcomed the news that the girl is returning.

They said her parents had been very upset but all of the family is now very happy. A sister of the seven-year-old said she never doubted they would get her back.

Meanwhile, a second child, a two-year-old boy who was also taken into HSE care in Athlone in Co Westmeath has been returned to his parents.

The child was removed from his family after gardaí were contacted by a member of the public and decided to act under the Child Care Act.

The child was returned to his family following garda inquiries.

Speaking to RTÉ News, the father of the child said he spent three hours being questioned at a garda station where he provided the boy's birth certificate and a DNA sample.

The man, who cannot be named to protect the identity of his son, said gardaí told him concern had been raised about the boy's blond hair and blue eyes.

He said: "I said yes, my wife's grandfather is the same thing. He told me the people will not believe it."

The man explained how he agreed to attend the garda station because "I don't make trouble".

Gardaí have told the man there is no longer an issue about the child's identity.

Minister for Justice Alan Shatter said he has concerns about the two cases and will be asking the Garda Commissioner for a report in order to review the procedures that applied. 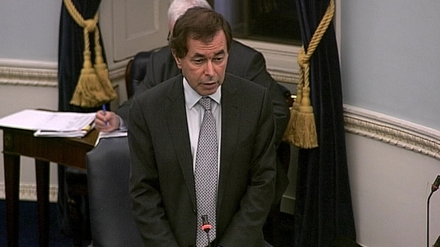 Speaking in the Seanad, Minister Shatter said he was very conscious that the gardaí have an important role in dealing with child protection issues and said he had no doubt that the officers acted in good faith.

Referring to an ongoing case in Greece, he said he was aware that the two cases here took place in the backdrop of events that have taken place outside the State, but said it was very important that the welfare of all children is safeguarded.

He said no group or minority should be singled out for unwarranted attention in relation to child protection issues.

However, he said he was not suggesting that was a motivation of the gardaí who in good faith acted in a manner they deemed appropriate.

The minister said he has asked social services to provide any support or assistance that the families or their children require.

“I'll be asking the Garda Commissioner for a report on the background to each of these instances with a view to reviewing the procedures that applied.”

“It is important that any lessons which might be learned do not detract in any way from the willingness and preparedness of the authorities to take appropriate action when they believe that children are at risk,” he added.

He said the concerns that arose about the children in question have now been proved to be groundless.

The two children concerned are the children of the parents concerned, he said, and there is no reason for any doubt in that regard.

Pavee Point Traveller and Roma Centre has called on the Minister for Children Francis Fitzgerald to establish an independent review.