Burmese pro-democracy leader Aung San Suu Kyi has collected the Sakharov Prize for Freedom of Thought from the European Parliament - 23 years after she was selected for the award.

In an address to the plenary, she urged MEPs to maintain pressure on the regime in Burma, also known as Myanmar, because the quest for democracy there was not at an end.

When Ms Suu Kyi was awarded the prize in 1990, her political party, the National League for Democracy, won 82% of the vote in an election.

But the military regime suppressed the result and she was placed under house arrest.

She received a rapturous welcome from MEPs in Strasbourg with European Parliament President Martin Schulz saying: "Twenty-three years later, we welcome you here and it is a great moment."

In her speech, Ms Suu Kyi said collecting the Sakharov Prize was a joyous and deeply meaningful occasion, but she warned that fear is still very much a part of society in Burma.

The Nobel Peace Prize winner urged the EU to maintain a healthy scepticism about the current political situation, which has allowed her to take a seat in parliament, but the army-dictated constitution disqualifies her from becoming president.

She said any constitution must be meaningful and ensure it enshrines the right of the people to shape their own destiny.

Ms Suu Kyi also appealed to the EU to maintain the diplomatic pressure to ensure that happens. 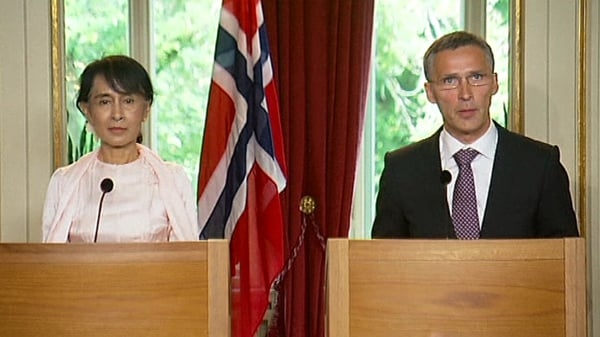