Fianna Fáil leader Micheál Martin has called on James Reilly to resign as Minister for Health.

Speaking after the annual Fianna Fáil Wolfe Tone Commemoration in Bodenstown, Mr Martin said Mr Reilly was clearly not in control of his department.

He criticised Mr Reilly and said he had questions to answer in relation to the deficit in the health sector.

Mr Martin also said that Mr Reilly had questions to answer about how discretionary medical cards are being given out.

He said the Budget was "cynical" and the Government is "out of touch with reality".

However speaking on RTÉ's The Week In Politics, Minister of State at the Department of Finance Brian Hayes said Mr Reilly has shown himself to be a reforming Minister for Health.

He said he had delivered on his commitments and his promises.

Mr Hayes said James Reilly was the right person in the Department of Health right now.

He said Mr Reilly would manage the budget with the support of the Taoiseach's Department and the Department of Public Expenditure and Reform.

Mr Hayes said it was the Government's responsibility to deliver the Budget.

He said Government had signed-off on and accepted the need for adjustments of over €600m in the health service in 2014.

Minister for Justice, Equality and Defence, Alan Shatter, has added his support for the health minister.

He said it is "astonishing" that Micheál Martin "has the chutzpa to criticise the Minister for Health".

Mr Shatter said: "The Fianna Fáil leader inhabits a fantasy world in which his 14 years as a senior Government Minister never occurred".

“He has no sense of shame and remains in denial of the impact of his party’s incompetence on the lives of all of our citizens", Mr Shatter said.

Sinn Féin Health spokesperson Caoimghín O'Caoláin said that if James Reilly is the person best-suited to the role of Health Minister then the Government is absolutely bereft.

He said it was not a case of James Reilly being replaced, but that if he was the best person that the Government had for the role of Health Minister, the Government needed to stand down.

Mr O'Caoláin said the Government had made poor political choices over their three budgets.

He said opening up free GP care to children under six years of age should not have had the consequence of taking medical cards from older citizens and from those leaving unemployment.

He said these measures could have been introduced without any resultant loss of supports or cuts in services.

Meanwhile, a spokesperson for Mr Reilly has dismissed suggestions that the three departmental arrangement for oversight of health spending compromises the minister's control of his department. 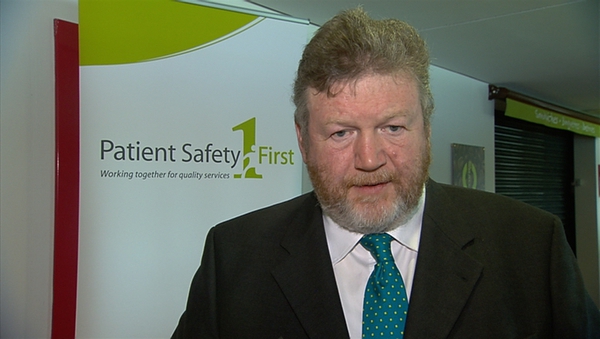