Thousands of Romanians have protested against plans by US energy group Chevron to explore for shale gas in a poor eastern region and a Canadian company's project to set up Europe's biggest open-cast gold mine.

Romania's leftist government's approval of the tapping of natural resources in the EU's second-poorest state has triggered nationwide protests.

Local communities have joined forces with environmentalists, civic rights groups and the clergy in opposing fracking.

Protesters criticised a lack of transparency in approving both projects.

Chevron suspended work on Thursday at what was to be its first exploration well in the small town of Pungesti.

Pungesti is 340 km northeast of the capital Bucharest.

The people of Pungesti, most of whom live off subsistence farming have continued protesting, asking officials to revoke drilling plans.

Over 800 locals, priests and activists gathered in front of where Chevron plans to install the well. Hundreds rallied in other cities.

In punishing windy weather, they waved "Stop Chevron" banners and knelt to the ground while a priest led them in prayer.

A group of horse riders clad in national costumes then destroyed a cardboard model of an oil well.

"I am against shale gas exploitation because of the chemicals used in fracking," said Vasile Ciobanu, 25, who has returned to Pungesti after working abroad for three years and now lives a few hundred metres away from the proposed well site.

"I don't think the company and Romanian officials are thinking about what could happen to people who live here."

Earlier this year, the company won all necessary approvals to drill exploratory wells in Vaslui, while it also has rights to explore three blocks near the Black Sea.

The exploration phase would last for about five years.

The US Energy Information Administration estimates that Romania could potentially recover 51 trillion cubic feet of shale gas, which would cover domestic demand for more than a century and help push prices lower.

In the central Romanian town of Campeni, around 2,000 people protested against Canada's Gabriel Resources plans to use cyanide to mine 314 tonnes of gold and 1,500 tonnes of silver in the small town of Rosia Montana.

The state also holds a minority stake in the mine. The government approved a bill to speed up the project, which has been waiting for approval for 14 years.

In Rosia Montana, many argue the mine is the only solution to create jobs.

But one of the bill's provisions grants the mine "national interest" status, which would make it easier for the company to force the few locals who oppose the plan to quit their land, in return for compensation.

Critics say this is unconstitutional.

The bill is now following a tortuous path through parliament,and it is unclear when a vote will take place. 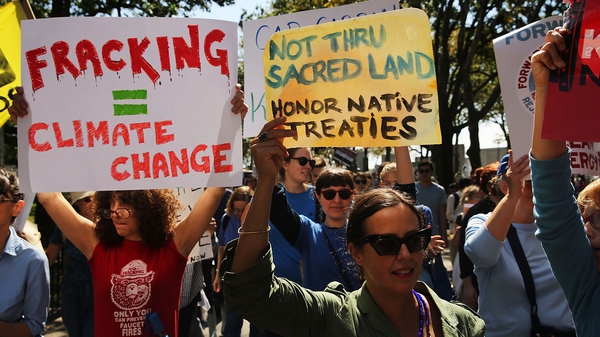