Four of the seven aid workers who were abducted by gunmen in northwest Syria yesterday have been released.

A volunteer from the Syrian Arab Red Crescent and three Red Cross aid workers were freed.

The International Committee of the Red Cross confirmed in a tweet that the four had been freed.

ICRC spokesman Ewan Watson said they were released in the Idlib region.

The organisation was awaiting information on the remaining three workers, also with the Red Cross.

The team had been on their way back to Damascus after delivering medical supplies in Sarmin and Idlib when they were abducted.

The move comes less than two months after sarin gas was used in an attack near the capital, Damascus.

The UN-backed Organisation for the Prohibition of Chemical Weapons is overseeing the destruction of Syria's chemical arsenal.

Its mission is expected to continue until at least mid-2014.

The deal over Syria's chemical weapons was agreed by the United States and Russia after the 21 August attack prompted US threats of air strikes against the Syrian government.

Inspectors who were in the country at the time confirmed that sarin gas was used in the attack.

Under a joint Russian-US proposal, Syria has now committed to destroying its chemical weapons arsenal within nine months.

It is believed to comprise around 1,000 metric tonnes of sarin, mustard and XV nerve agents.

Elsewhere, US Secretary of State John Kerry called for a peace conference on Syria "very soon" but said peace would not be possible without a transition government to replace President Bashar al-Assad.

"We believe it is urgent to set a day, to convene the conference and work toward a new Syria," Mr Kerry told reporters after meeting United Nations special envoy to Syria Lakhdar Brahimi in London.

"We believe that President Assad has lost the legitimacy necessary to be a cohesive force that could bring people together," he said, adding: "there has to be a transition government in Syria to permit the possibility of peace". 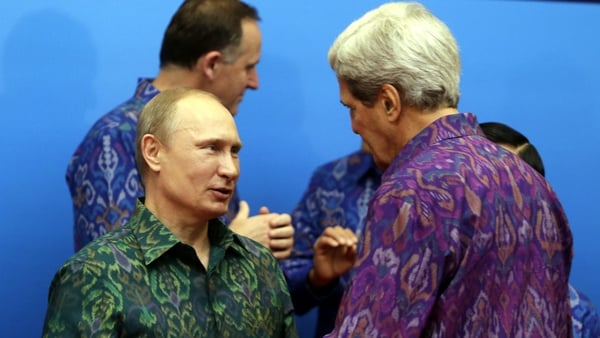 Russia & US agree on elimination of Syria weapons