Jörg Asmussen, a member of the European Central Bank executive board, has said that he expects Ireland to exit the bailout by the end of the year.

He said Ireland's bailout programme had been a success, but he said there were still "pending risks" in the banking sector.

Speaking on his arrival at the meeting of eurozone finance ministers in Luxembourg, he would not be drawn on whether or not Ireland should seek a "precautionary" credit line on exiting the bailout.

He said it was up to the Irish authorities if they fully want to exit or if they want support "to smooth their way back to the markets".

Arriving at the meeting, Minister for European Affairs Paschal Donohoe said the Government would decide on whether or not to seek support on leaving the bailout only after the Budget was presented tomorrow.

"Our objective is a sustainable exit from the programme," he said.

He said there has been steady job creation in Ireland for the first time since 2008.

Eurozone finance ministers will also consider how to pay for the repair of European banks following next year's stress tests, which will be carried out by the ECB.

There is still no agreement on what funding should be made available to recapitalise banks if the tests show that Europe's banks are still distressed following the effects of the eurozone crisis.

Ireland will undergo its 12th and final review mission of the European Union, European Central Bank and International Monetary Fund troika at the end of the month.

At that point the Government should have decided whether or not the State will need any further assistance to ease the country back into the international bond markets.

Although the European Commission has recently signalled that market conditions are very favourable for Ireland, and that it has strong cash buffers, the Government is still thought to be interested in having what is called a precautionary credit line - something like an overdraft facility, which will reassure investors that Ireland is cushioned if there are any shocks.

No decision will be taken at today's meeting, but any request for a credit line will have to be made through the eurogroup of finance ministers, who in turn will mandate the permanent bailout mechanism, the ESM, to arrange the modalities of a credit facility.

The question of what conditionality is attached will be the key one for the Government.

It will want to make it as light as possible, but much will depend on how the Troika views any lingering weaknesses in the Irish economy once the bailout comes to an end.

Meanwhile, Minister for Finance Michael Noonan is to travel to meet European and International Monetary Fund officials within the next two weeks to discuss how best to manage the bailout exit.

He will meet European Commission officials and ECB staff on 23 and 24 October, before flying to Washington for meetings with the IMF on 28 October, a finance ministry spokesman said this morning.

The talks with the Troika will centre "on what options may be available to Ireland as it exits the bailout, including potential backstops," the spokesman said.

Earlier the interest rate on Government bonds dropped to its lowest level in four months. 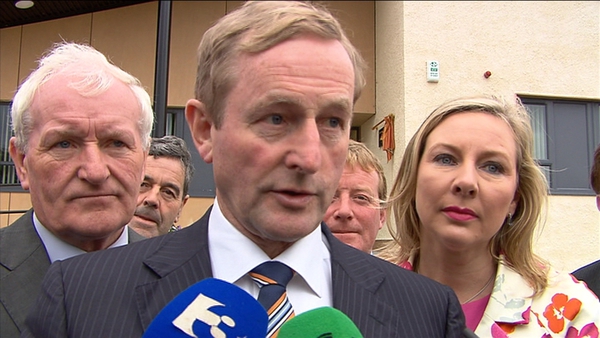