Minister for Health James Reilly has said the Health Information and Quality Authority report into issues relating to the death of Savita Halappanavar makes for very disturbing reading.

Mr Reilly said his thoughts were with the family of Mrs Halappanavar at this time.

He added that he would make sure to implement the recommendations in the report, and that a full National Maternity Service Plan needed to be developed with urgency.

The minister said he would be very happy to meet Praveen Halappanavar, and that he deeply regretted that the health service had failed his wife in such a terrible way.

The HIQA report on the death of Mrs Halappanavar and related issues found a failure to provide the most basic elements of care in her case.

The 257-page report found that there were many missed opportunities, which if acted on, might have changed the outcome for her.

Today's report was conducted after HIQA was asked by the Health Service Executive to investigate the safety, quality and standards of services provided at University Hospital Galway.

It followed the death of Mrs Halappanavar on 28 October last year.

She died one week after she was admitted to the hospital when she was 17 weeks' pregnant and miscarrying.

The report also revealed wide variations in clinical care in the 19 public maternity hospitals and units.

It stated there is no nationally agreed definition of maternal sepsis and inconsistent recording of it nationally, as well as no centralised approach to reporting maternal morbidity and mortality.

As a result, it is impossible to properly assess the performance and quality of maternity services nationally, the report found.

In the case of Mrs Halappanavar, the report said there was a failure to recognise she was developing an infection and to act on her deteriorating condition.

It found that University Hospital Galway did not have effective arrangements to regularly record and monitor her condition and that the management of the delivery of maternity services was not consistent with best practices.

Minister Reilly said it was clear that there was a failure of basic care in Mrs Halappanavar's case.

The minister also said the fact that there was a similar case involving Ms McCabe in 2007 deeply disturbed him.

Mr Reilly said patient safety had to be seen as paramount in the health service, and that the next National Service Plan would have a strong emphasis on patient safety.

He said he believed that in the past there may have been an attitude amongst health service management that patient safety was an issue for clinicians alone.

He said that could not be the case.

Minister Reilly said that each CEO of each hospital, and each new hospital group will have it made very clear to them that this is a core part of their responsibility and has to be their primary concern.

He added that a mechanism, similar to the early warning and national maternity early warning score cards would be developed for the recognition of sepsis, and for clinical handovers.

Minister Reilly said he expected the introduction of the new hospital groups would mean that within the next 12 months, these systems would be in place and all staff would understand their duty of care to the patient, and management would understand its role in protecting patients.

The inquest into the death of Mrs Halappanavar took place in April and found she had died due to medical misadventure.

A HSE Clinical Review report was published in June, which found inadequate assessment and monitoring and a failure to recognise the gravity of the situation and the increasing risk to her life.

Her husband Praveen has initiated legal action against the HSE.

His solicitor Gerard O'Donnell welcomed the report and said this was a difficult time for Mr Halappanavar coming up to the first anniversary of the death of his wife and baby daughter.

He said Mr Halappanavar was pleased the report has been published and will review it along with his legal team.

Speaking at the publication of the report, HIQA Director of Regulation Phelim Quinn extended his sympathies to Mr Halappanavar.

He said the report would be "a further difficult read" for him and his family.

Mr Quinn said this was not a specific investigation into Mrs Halappanavar's death, but that her death was a seminal event that led to the establishment of this statutory investigation.

Dr Lucas said there were a series of signs that could have been recognised as indications of Mrs Halappanavar's deterioration or as signs of the development of sepsis.

She said if those signs had been identified there may have been a different outcome.

HIQA Chief Executive Tracey Cooper said the recommendation for a code of conduct for employers in the health service was a fundamental development.

Ms Cooper said it was about making it absolutely explicit on what the requirements are for managers.

She said the accountability and responsibility for the following of this code would be with the HSE, and in the case of private providers, it was up to the HSE to ensure private providers would follow it.

Group Chief Executive of the West-Northwest Hospitals Group Bill Maher apologised on behalf of the hospital to Mr Halappanavar and his family for the events related to his wife's care that contributed to her death. 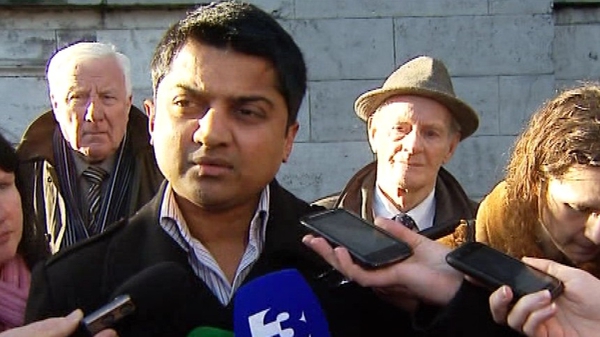