Minister for Finance Michael Noonan has said €2.5bn is to be taken out of the economy in the Budget and not the projected €3.1bn.

Minister Noonan said that "resurgence" in the economy and "significant savings" will make up the rest.

He said: "Things are going well. It is still of course going to be a tough Budget, but maybe not as tough as we thought it would be a couple of months earlier."

Mr Noonan was also asked about comments made by SIPTU's Jack O'Connor that the union would propose pay rises across the economy if the Government exceeds its target of reducing the Budget deficit.

The minister said there was "clearly no scope" for public sector pay rises following the Haddington Road Agreement.

However, he added: “If private companies feel they have to have modest pay rises, they should go ahead and negotiate them."

On Friday, Mr Noonan said his aim with the Budget was to beat the deficit target, achieve a primary surplus and to enable Ireland to exit the bailout programme.

He said he wants Ireland to be seen as a safe country to lend to at relatively low interest rates.

The parameters and strategy of next week's Budget were put to Cabinet today.

The European Commission has given its preliminary approval of the Government's proposal to seek a budgetary consolidation of less than the €3.1bn originally sought by the Troika and enshrined in Ireland's bailout programme.

It said the €2.5bn adjustment provides a sound basis for taking forward the necessary fiscal consolidation in Ireland and paving the way for a successful exit from the bailout programme.

The commission said the final assessment of next Tuesday's Budget would form part of the 12th and final review by the Troika.

Room to manoeuvre across departments - Howlin

Minister for Public Expenditure and Reform Brendan Howlin has said there is now "room to manoeuvre" across all departments.

Speaking on RTÉ’s Six One, Minister Howlin said he had been "profiling" government spending for "some weeks" and was now convinced that the Government could meet a lower deficit target in order to exit the bailout programme.

He said he had met with every line minister and had assessed their demands for the next year.

He said the lower Budget target meant there would be €400m less in expenditure cuts and €200m less in tax increases.

The minister said the Government had three main targets with the Budget - to maintain growth, to sustain jobs and to ease the pressure on families.

He added that there would have to be a strong budgetary discipline in every department and but preserving a basic standard of living was a priority.

When asked if spending at the Department of Health would come in on target, Minister Howlin said every department was "on profile" at the end of September, and although there were still a few months to go to end of the year, discipline must be maintained.

Kenny questioned on role of EMC

Taoiseach Enda Kenny was asked a number of questions about the Economic Management Council (EMC) during Taoiseach's Questions in the Dáil this afternoon.

The Taoiseach said the EMC has met five times since the summer recess and that the members of the council met the banks twice in 2012.

The EMC is made up of Mr Kenny, Mr Noonan, Tánaiste Eamon Gilmore and Minister for Public Expenditure and Reform Brendan Howlin.

Sinn Féin leader Gerry Adams said the Budget is being put together by the EMC and questioned if it was correct for four men to decide to cut child benefit.

Mr Kenny said the Budget will be signed-off on collectively by the Cabinet by next Tuesday.

Fianna Fáil leader Micheál Martin suggested that more advisors than members of Government attend the EMC and said there is a lack of transparency.

People Before Profit Alliance TD Richard Boyd Barrett said the dictatorship of the EMC is a conduit for the demands of the Troika.

Minister for Education Ruairí Quinn has said there will be no increase in pupil-teacher ratios in DEIS schools in the upcoming Budget.

Responding to questions in the Dáil, Mr Quinn said while DEIS schools would not be affected, the department was "looking at others".

He pointed out that pupil-teacher ratios had not been touched since the current Government came into office.

Earlier, the Minister for Energy, Communications and National Resources said the adjustment of €2.5bn meant there would be €600m less hardship for the public.

Pat Rabbitte said the fact that it had been approved by the Troika was something to be celebrated.

He said he thought the unemployment figure would have fallen below 400,000 by Budget day.

Meanwhile, Sinn Féin is proposing a 7% tax increase for income over €100,000 and increases in DIRT and second home taxes.

The party said it would abolish the property tax and refund homeowners.

Sinn Féin is also proposing to increase employers' PRSI on the salaries of high earners.

The party is pledging to extend free GP care to under fives in a package of adjustments totalling just under €2.5bn.

Speaking on Today with Sean O'Rourke, finance spokesperson Pearse Doherty said the Government should think of hard-pressed families when deciding on details within the Budget.

He said: "I think where we part company with the Government we believe that struggling families need to be given back and that's why, in our Budget proposals, we propose to abolish the property tax.

"We propose to take 296,000 earners out of paying [Universal Social Charge]. We believe that the 86,000 carers who got cuts in the respite grant should be given that money back." 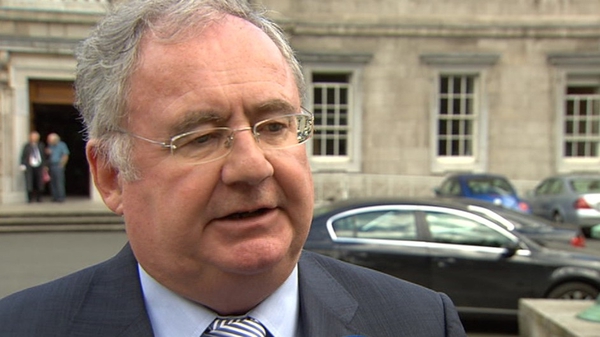