Eight people have died, including six Egyptian soldier, in a fresh series of attacks across the country.

Dozens of supporters of the Muslim Brotherhood were killed in clashes with security forces and political opponents yesterday.

The death toll across Egypt has risen to 53, state media said, with 271 people wounded.

Security sources said gunmen opened fire on the soldiers in Ismailia while they were sitting in a car at a checkpoint near the city on the Suez Canal, a vital global trade route.

In Cairo, two people were wounded in an attack on the state-owned satellite station while medical sources said three were killed and 48 injured in a blast near a state security building in South Sinai.

A witness said it was caused by a car bomb.

The Brotherhood denies the military's charges that it incites violence and says it has nothing to do with militant activity.

However, further confrontations are feared, with supporters of ousted president Mohammed Mursi's calling protests for tomorrow and Friday.

The calls follow and an interview with Egypt's army chief in which he said he told Mr Mursi as long ago as February he had failed as president.

Yesterday’s clashes took place on the anniversary of the 1973 war with Israel - meant to have been a day of national celebration. The countries signed a peace agreement in 1979.

Authorities had warned that anyone protesting against the army during the anniversary would be regarded as an agent of foreign powers, not an activist - a hardening of language that suggested authorities would take a tougher line.

The Muslim Brotherhood accused the army of staging a coup and working with security forces to eliminate the group through violence and arrests, allegations the military denies.

Sinai-based militants have stepped up attacks on the security forces since the army takeover.

Army chief General Abdel Fattah al-Sisi, who has promised a political roadmap that would lead Egypt to free and fair elections, said in the interview published today that Egypt's interests differed from those of the Brotherhood.

"I told Mursi in February you failed and your project is finished," privately-owned newspaper al-Masry al-Youm quoted Sisi as saying.

Militant attacks, including a failed assassination attempt on the interior minister in Cairo in September, are deepening uncertainty in Egypt along with the power struggle between the Brotherhood and the army-backed government.

Neither side seems willing to pursue reconciliation, raising the possibility of protracted tensions in Egypt.

Gen Sisi denied Brotherhood allegations that the army had intended to remove Mr Mursi through a coup, saying it had only responded to the will of the people.

Before Mr Mursi's overthrow, Egyptians disillusioned with his year-long rule had held huge rallies demanding that he quit.

Last month, a court banned the Brotherhood and froze its assets, pushing the group, which had dominated elections held in Egypt after Hosni Mubarak's fall in 2011, further into the cold. 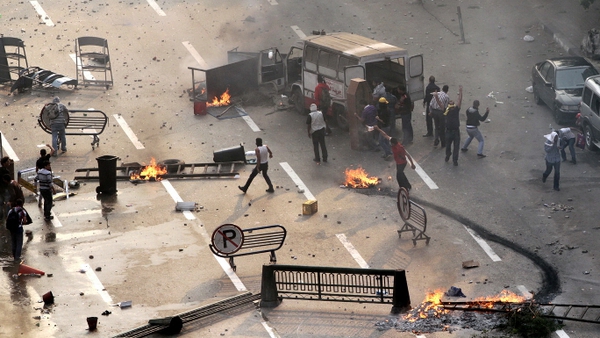